Stephen Hsu over at Infoproc has interesting data on predicting height from SNPs. It's visibly getting close if you use a scatterplot. 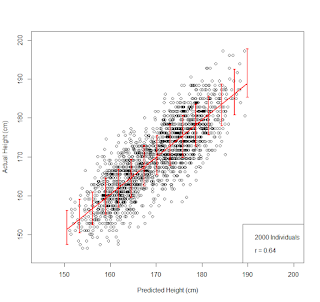 I don't go over to the site as often as I did two years ago.  I should.  There's a lot happening. The significance of the above is that height is only the beginning. We'll be increasingly able to predict other traits from SNP's.

Everyone accepts that height is largely genetic, though environmental factors can have a negative effect.  My third son was almost 16 and nearly full height when he came to America. When he had his first physical here, it was noticed for the first time that he has a spine curvature and should be about two inches taller.  We suspect the fourth son might have been taller as well had he been better fed as a child. Prenatal care, early nutrition, disease, and injury can all affect height. I don't think there's anything that increases height.

The drama is going to be about intelligence, but there are lots of other things that might come into play.  Personality characteristics, predisposition to homosexuality, religiosity, musical ability, likelihood of criminality - all of these are going to come up eventually, and what will we do?

Posted by Assistant Village Idiot at 10:31 AM