Perspective in Watership Down 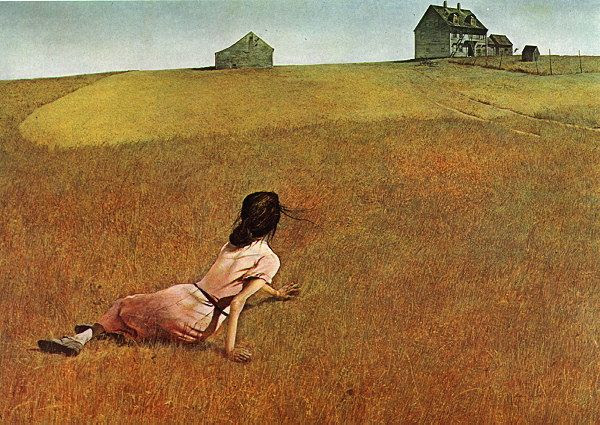 Years ago, an artist friend showed me that Wyeth's point-of-view in "Christina's World" is intentionally just a bit off. Where the artist is standing is not quite right, as if he is eight feet tall or standing on a platform of some sort. The effect is an increased detachment from the scene, which in turn makes Christina even more isolated, out-of-sync, abandoned. Nifty stuff, which I never see myself in the visual arts and have to wait for someone smarter to show it to me.

Apparently someone is having another go at making Watership Down into a movie.  The first one was awful; I fear what the second will bring.  Yet to explain that I have to reflect some on what it was that was just not right about the original version.

I first read Watership Down aloud to Jonathan, who was about 10. I worried that there was an awful lot of description, especially of unfamiliar plants at ground level and feared that would bore him.  I may have skipped phrases and even sentences along the way in an effort to keep him engaged. We were well in before I asked him if those sections bothered him. "Dad, they're rabbits.  That's how they see the world." Well fine, then. So I skipped nothing when I read the book to Ben three years later. The main narrative is all delivered at rabbit-level. The only exceptions are when men intrude on the text, such as Adams quoting Lockley's The Private Life of the Rabbit, or introducing each chapter with a quote from classical literature. ( I see what you did there, Richard.)

The closest references to landscape are still shortened, as if a man who had been on all fours among the rabbits rose to his knees briefly and looked about. The perspective of the narrator in Watership Down is very low.  Not quite chin-to-the-ground, as the speaker is clearly a human among the rabbits and not a rabbit himself. I don't know how much of this was device on the author's part and how much was simply automatic in wanting to describe lapine life up close. Not only is it low to the ground, it is often underground, where our eyes and ears are very close to the rabbits.  We can almost feel the fur, smell the earth at those moments. Adams moves us into their world via this perspective. Things at distance might be smelled or heard, but they are not seen.

This is what makes it so uplifting and exalting when Fiver has a vision of a place where they can actually be up high and see far.  He is imagining something almost completely unfamiliar to rabbits. Even Hazel can barely grasp it, and the others seem to go along largely by trust. When they reach the place and look out we are transported as well.  This world is a new thing to them, a magical place, and we feel it with them, having lived down on the ground with them for so long. Hazel's inspiration that Keehar could be useful to them because he can see far is an enormous leap for creatures who likely can't even perceive things clearly beyond a few dozen yards. As any number above four is is simply hrair, many, where five and a thousand are not clearly distinguished, so also is distance, where anything farther than a two-second dash is not understandable, the stuff of visions.

It is this perspective that gives Watership Down its power, rather than detracting from it.  I focus on conversation and plot when I read, neglecting description, but I may have bequeathed that sense of place to my children anyway because of reading aloud. When I at last finished my first reading to Ben (Jonathan listened in for some of it), he grabbed the book and turned immediately to the beginning, reading it on his own even though it was beyond even his level.  He reached the end and without even pausing for breath turned back to the introduction - no map, no table of contents. He lived in that world for months, really. invisible and on his stomach among the rabbits.

We went to England in the summer of 1997.  The February before I discovered in amazement that Watership Down was an actual place. We have to go, Ben and I whispered to each other. We have to see this. It was fun, and carried a sense of completeness and goal-achieved, but it wasn't magical. It wasn't breathtaking or life-changing. Now I know why. It was Watership Down, near Overton and Kingsclere, but we only saw what human beings see.  It wasn't Watership Down, where rabbits live and Bigwig once explored.  For that we would have to have gotten down on the ground for a long period of time, even overnight, to adjust to the difference in place.

Interestingly, the first movie got that part right, if I recall correctly.  A lot of it took place right up close to the rabbits, without much looking down on them from a Keehar's-eye view. Yet they got another perspective largely wrong, and the contrast took us out of any reasonable suspension of disbelief.  In drawing a cartoon, they put us immediately back into the world of humans.  Those rabbits are stylised according to human terms. That's not a problem for the grass and sky and weather, but it doesn't work for the rabbits.  To get it right, it would have to be cartoon rabbits the way that rabbits would see them - rabbits as they are imagined in Dandelion's stories. I have no idea what that is, but I would bet that shapes and features would be less important, sound (and feel and smell) more important.

Chip and Dale can be cartoons; Toad, and Ratty, and Mole can be cartoons because they are mostly people-children with animal characteristics.  Charlotte and Templeton can be cartoons because the whole story is really from Fern's perspective they are peoplish as well.  She is moving them about on the land of counterpane. But Strawberry is a rabbit.  He is stretched to acquire some human characteristics, perhaps, but he remains a rabbit. Hyzenthlay is a rabbit, however much her words echo a timeless feminine of many creatures.  Woundwort is already becoming a cartoon even as he lives, and it is not surprising that Adams goes almost immediately into what his mythic legacy is among rabbits.  Yet even he is still mostly rabbit.

Even with CGI, how do you get that rabbitness, that underground confinement that is comfort, that circumscribed landscape into a movie?

Update:  Reading up on the 1978 film, I wonder why I didn't like it better. They seem to have gotten many of these points right. As I had not read it out loud yet, perhaps the voices bothered me.  I now recall that when I read it I thought of the voices as murmurs rather than enunciated, and had some decisions to make how I was going to portray that when I did thm myself.
Posted by Assistant Village Idiot at 3:32 PM

I've never read Watership Down. Nor was I a Tolkein fan. The more I look at this Wyeth picture, the more I like it.

Some just don't have the taste for epic fantasy, fairy tale, and beast fable. Tolkien and Lewis both commented on the fact that even some of the other Inklings, admirers of their other writings, didn't like those genres. The story is that Hugo Dyson, hearing the first lines of Lord of The Rings said "Not another f-ing elf!"

But now you know a bit about why you like the painting.

It's interesting that you talk about Watership Down in terms of its perspective and its sense of place, because that's perhaps one of the most noticeable problems in filmmaking today. Every blockbuster is infused with a sense of clean, green-screened sameness, and whenever you see a movie that seems to exist in a real place, it's a refreshing change rather than the status quo.

There are so many things so inextricably tied to the book that simply won't translate: the understanding of being rabbits, of what warrens mean socially and how they feed and interact.

To make it work as a movie, you have to scale it back and make it into an action story, at which point its whole rabbitness is really besides the point. Frankly, you could probably make a better movie if you took most the plot and just made all of the characters human. Save some money on CGI.