The Way NH Used To Be

Remembering No More Dead Dogs and A Dog Called Kitty reminded me of the Great Stone Face Award, NH's annual contest for best children's book, voted on by 4th-6th graders. My wife ran this for a few years in the 1980's, a labor-intensive task at the time. In that era, children voted on paper ballots for whatever they wished. The thousands of ballots were sent to our house, where we sorted through them by hand.

It was ultra-democratic, and quite charming. There would be the occasional vote for Moby Dick or Oliver Twist (rather doubtful), and confusing votes for "Narnia," "Babysitter's Club," or "Sweet Valley" that were difficult to assign. But every kid could vote for whatever he damn well pleased, unlike other states, which often gave their awards on the basis of committees of adults. Heck, you've got the Newbery for that. Hundreds of titles got a mention, having one last day of minor fame before gradually slipping beneath the waves.

Either one year or two after Tracy stopped doing it, the format changed to a short list of newer books that the children could choose from. This struck me as great loss for independence of thought.

New Hampshire is one of the few places that still has town meeting, though fewer every year. That also is ultra-democratic, in which any citizen can get up and address his fellow townspeople about issues of concern to them all.

The Hew Hampshire presidential primary every four years used to have all manner of candidates. When I was in high school, a Hawaiian king and his multiple wives (in odd-fitting grass skirts) came to speak at one of our assemblies, Harold Stassen had a perpetual candidacy, and all manner of crusaders, manics, and reformers came through. I think it is technically still true that a very low number of signatures and a nominal fee can get you on the ballot, but the change in media culture makes it less likely they will spend much time here. They can reach more people with a website and test the waters that way.

Are we seeing a common thread here? I have lauded this approach and my state's culture in the past, referencing it as one of the last places where democracy/independence/eccentricity still functions. Yet looking at the results, I'm not sure the old ways are the best ways. In the era that students could vote for whatever book they wanted, Judy Blume won eight years out of ten, with Superfudge winning five years in a row. Any system which creates that result should be scrapped - especially if it's Judy Blume we're talking about here. More choice has led to less choice. As for this year's winner, I have no doubt that the dog dies in the end.

Considering town meeting, we always imagine it will be like this 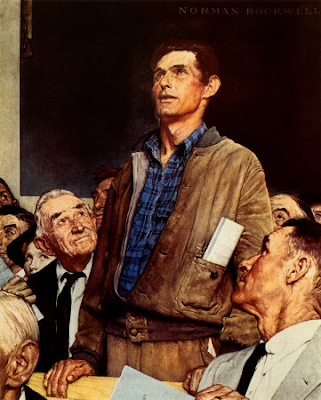 Though there is at least some pointless ranting every year as well.

As for the primary, I'm not sure that seeing either the Hawaiian king or Harold Stassen provided much value-added. I suppose there was some advantage to the mere illustration Yes it's true. Anyone can run for president here. It's a good thought to know in the back of one's mind.
Posted by Assistant Village Idiot at 12:59 PM

It sounds like "independence of thought" isn't a striking characteristic of school children.

a psychiatrist who learned from veterans said...

I have rather envied your state's presidential primary vis-a-vis the rest of the country. Any idea how long it takes to establish residency there or, if just visiting, what's the lead time before the primary to see the candidates and the process?

I think by law residency has to be immediate now, if it can be proved. The primary will be 1/16/16. If you are an independent, you can choose either ballot at the door. If you are registered to a party, you can only vote in that primary. You have to change your affiliation at town hall if you don't like where you are sitting.

Candidates are testing the waters with visits to look at moose or talk to a Rotary Club even now. But they won't really start cluttering up the landscape until early 2015.

In theory, it really is the best system. In practice, I'm not sure it has worked out as well for the country as one might hope.

James, it is my understanding that independence of thought in school children is considered to be something to be stamped out, with a will and heavy boots.

Sam, I think that is unnecessary with that cohort, which is already sheeplike even in places like NH where we encourage them otherwise. wWhat worries me is when that persists beyond middle school and highschool, by adults who manipulate that social insecurity for their own political ends.

Having been that guy, I think I have some insight into how that works.

I can't help but read this with an eye towards the annual church budget meeting on Sunday...

Yeah, church budget meetings are like that in every region.

Wrt the sheeplike; perhaps you can encourage a little more independence if you don't educate them in cohorts.