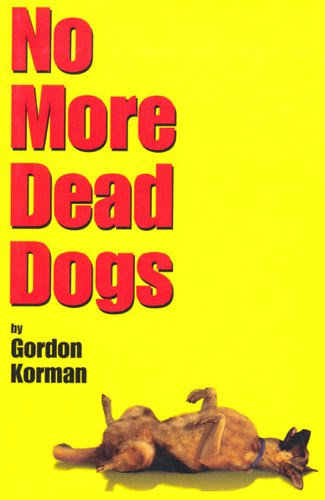 To understand the family story about A Dog Called Kitty, one has to start with Korman's excellent mockery of the doggie genre, above.  A student is punished for writing a critical book report of the English teacher's favorite book, Old Shep, My Pal - which the drama club also has in rehearsal. "How did you know the dog dies in the end?"  "If you see a book with a dog on the cover and one of those medallions that shows it won an award, that dog is going down!"

When Ben was a HS senior, he had a crush on a girl a few years younger.  She was less enamored of him, but friendly, at least.  They weren't hitting it off, weren't clicking, so Ben suggested that if each read each other's favorite childhood book, they might understand each other better.  He handed her Watership Down.  She thought it was okay.  She handed him A Dog Called Kitty. 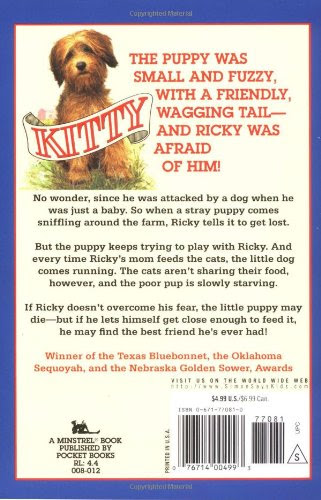 Ben dutifully read it, then described it to us. After the usual poignancy of boy and dog not meshing at first but then becoming utterly devoted to each other (rather a precursor to rom-com movies, when you think of it) there is of course great danger, and the dog dies. Ben is now giggling as he tells it.

Here's the thing: the dog doesn't die in the heroic scene of great danger, during the rescue.  The dog lives through that.  Ben cannot go on, has to stop and compose himself. Kitty dies in the next chapter, by accident, when an oil pipeline piece falls off a truck randomly, killing him as he's running along the road (Those darn oil companies!). How can any writer misunderstand the genre so thoroughly as to do that?

"I sure loved Kitty. That's why it tore me up so much when he died."

We nodded at each other.  "I have to tell you, Ben.  This is not the girl for you."
Posted by Assistant Village Idiot at 10:59 PM

There are exceptions to the rule about dogs with medals

Seriously, I have to remind myself to be careful drawing conclusions from looking at the books on display in people's living rooms.