I got together with friends from St. Paul's ASP class of 1970 yesterday.  Larry David, in the middle, I have not seen in almost 50 years, though we have spoken on the phone a few times and exchanged a few emails. He was a science wizard even by ASP standards.  Ted Kontos, on the right, retired from the Portsmouth Naval Shipyard a decade ago and has worked other science-y things since then. As my current friend list is heavily populated with engineering and science guys, it is interesting to note that this goes back quite a ways, even though I have never worked in science.  My people, I suppose. Ted is the one clever and deft enough to manage a selfie. 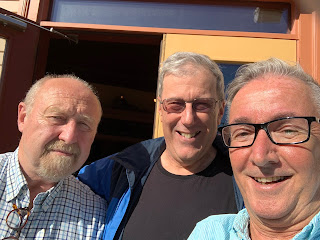 Ted now lives in the small city that Larry grew up in, and both of their wives come from around Buffalo, so I got to sit back and just listen for some of the conversation and be entertained, which is always nice. I learned about Beef on Weck, among other things. The local restaurant that serves it is one I had vowed to never go to again, so I may have to modify that.
Posted by Assistant Village Idiot at 10:15 AM