According to Ben, there's a new TV show called "Hank" with Kelsey Grammer. There was an old show called "Hank" in the mid-60's. It was about a college drop-in trying to go to school for free. I'm one of the few who remembers it, apparently. 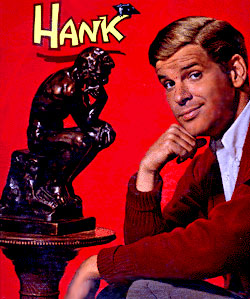 He's up with the sun, and he's got the college ringin'
As he goes about another swingin' day.
With jobs to be done or errands to run
He's A Number 1 okay.
He'll dry clean your coat, be a butler or a porter
If it means another quarter in the bank.
He'll get his degree, his Phi Beta key
And get 'em both for free.
That's Hank!

Sad ending, it seems. Dick Kallman, who played Hank, was murdered by a drug addict in the 70's.
Posted by Assistant Village Idiot at 9:42 PM

One of my first memories of really connecting with you (in retrospect, that should have been a very scary moment, that my mind and yours worked in similar ways) was the night at a Bible study when you started to sing the Hank theme song and I was able to finish it. Didn't know of the demise of the star of the show, however. You continue to be a fount of information.

After leaving my prior response, the word verification for the next comment is "kingly". So, I couldn't pass up the opportunity.

Never heard of it. This was on during my high school years.I had better things to do, such as homework. My TV watching nosedived from high school on. I do remember The Man From U.N.C.L.E, at least as a name, though I have no idea who starred in it nor do I recall the theme song.

"Hank" is yet another example of naming a sitcom off the first name of the main character, which has not worked in any context since... "Rhoda," maybe?

Michael - I recall that night you also knew that Stan Musial's monster year was 1948 and we discussed Bill James' theory that players peak between 26-28.

Gringo, if you knew in highschool that homework was a better thing to do than watch sitcoms, you were four years ahead of me in maturity.

Are we only counting first names as eligible?