It was all, start to finish, worse than we knew.  In the lands between Hitler and Stalin 1933-1945, it was not only worse than we knew then, it was more horrible and cruel than we knew even a few years ago.  Timothy Snyder puts the count at 14 million killed, entirely separate from the soldiers and partisans killed in battles and skirmishes.  This was primarily in Ukraine, Poland, and Belarus, though massive deaths in Hungary, Russia, Lithuania, and Czechoslovakia are also reported.

Some of the killings were more insane than simply cruel: Stalin demanded more and more grain from the peasants to feed those in the cities, believing the countryside was hiding and hoarding food in an effort to resist the obviously-superior method of collectivsation – and so 3 million of them were starved; Hitler believed that communism was essentially a plot by worldwide Jewry, and so killed Jews wherever they were found, as if they were all somehow involved. Yet intentional cruelty was also an entirely matter-of-fact method of dealing with problems on both sides.  Hitler’s intent in invading Russia was to starve up to 30 million Slavs to create room for Germans to grow food.  Failing that, he fenced off Soviet POWs in fields behind barbed wire and gave them nothing. 3 million starved.

From 1933-39 Stalin executed more people than Hitler by a factor of a thousand; from 1939-41 they ran even; from 1942 on German forces, aided by thousands of local volunteers, displayed a killing efficiency not since rivaled. (Mao killed many more, and more quickly during the Great Leap Forward, but rather sloppily over a much greater population.) Einsatzgruppen would march hundreds out of a village on a Tuesday to dig huge pits in the forests.  On Wednesday they would march out thousands to be forced to kneel at the edge of the pits, shoot, them, and push them in.

It is numbing to read, and I have had to stop when I found myself waking in the morning and immediately picturing some horror from yesterday’s reading. Snyder uses anecdote appropriately, singling out one victim, one particular poignancy from the exectution of 18,000 in a week to stand for the others.  A message left for family by a young woman moments before execution, a fleeting memory by a survivor of a lttle boy being eaten, a brief background of a professor trying vainly to escape by train. I contrast this to the dishonest use of anecdote we sometimes encounter now: the story of an outlier or exception whose experience tells against the overwhelming majority but is brought forward because “his story deserves to be told, too.”  Only in proportion. It is fair to bring an untold story forward, somewhat less fair to underreport an already-known one. But the overall effect must be close to the reality.

I mentioned recently that both Hitler and Stalin each regarded their forces as the only ones with the courage and determination to stand up to the other.  Hitler believed that all anticommunists should rightly be allies of the fascists; Stalin believed the reverse, and the two largely succeeded in dividing Western opinion along those lines, even to this day. American communists encouraged their sympathisers to embrace this dichotomy, that any opponent of fascism was therefor a voice for freedom 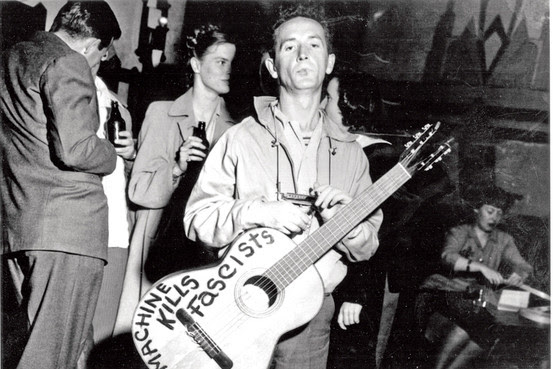 “fascism and freedom are the only two sides battling” Woody Guthrie, 1940 (Note also that this memory of Guthrie is one of the more common one kept into the present.)

Even as Timothy Snyder’s Bloodlands came out, there was some complaint from hisorians that he was wrong to compare Hitler’s genocide to Stalin’s mere mass murder. There continues to be resistance to the idea that the Holocaust was not a unique, far-worse episode whose seriousness is diluted by comparison with any other events, that killing lots of the same ethnic group for racial reasons is somehow obviously worse than killing them for political reasons.

On the other side of the divide, one still finds echoes of shrugging at fascism and antisemitism in the service of defeating communism.  It is far more common in Europe, but I kept finding it creeping in at the edges in reading about Feeneyism and “traditional catholics.” However doctrinal the motives of most of those folks may be, there remain too many whose less-attrctive motives leak out in their statements. My own political awareness came in the 1960’s, a period I did not consider to be close to the 1930’s-40’s at the time but now perceive clearer lines of descent.  Those who are younger may find that this insane ideological dichotomising is ebbing away, and I certainly hope so.  To my eyes it is holding firm.

His overarching point, to my reading, is not to compare but to show how both enabled the other to increase in killing.  He finds similarity in their totalitarianism.  He notes how each learned from the other something of how mass-killing might be accomplished.  He notes their cooperation and commonality in the late 30’s. I didn’t see much energy being put into moral equivalence at all. But some reviewers have perceived the work as all-but-explicitly finding moral equivalence, and deploring it.  I wonder it it is their own partisanship they cannot let go.  Yet I may just be obtuse, here.  It’s happened before.

Snyder’s count of of the mass-killing of 14 million is intentionally low – only the mass killings.  By his own statement he is being conservative, not counting those who were killed in deportation, in concentration rather than death camps, by increased disease, or civilians in bombings. The dates are not arbitrary, but there is necessarily much explanation – and death – left out on either side, in the 1920’s and 1950’s. Still, it’s a more complete picture than we have had.

The wikipedia article about the book is pretty good, BTW.
Posted by Assistant Village Idiot at 7:28 PM

The whole idea of "hate crime" strikes me as just wrong headed.

It is true that the law makes distinctions between "crimes of passion" and "premeditated." Manslaughter and murder are two distinct categories.

But when we try to slice the premeditated section into thinner and thinner slices we get into trouble. Especially when the slicing depends on fashion as much as anything. Greed is a classic motivator for murder. So is love/lust. Both have been around for a long time and are generally accepted and understood.

but now, for instance, it is the fashion that we must not hate this group or that group. And because it is a crime against fashion it is MUCH more evil than those old classic motivations. I'm not a legal scholar but it seems to me that the value of determining motive was not to note the egregiousness of the offense, but to help to determine guilt. Did the murderer have a reason (whatever it was) to commit the crime? If so, it points to guilt and brings conviction and judgment.

But whether the crime was motivated by greed or love, didn't matter. what mattered is that it was planned, considered, thought out and carried out in full awareness, not in a moment of passion.

So with Joe and Adolf, why should we bother with such fine distinctions because we think their motives may have been different? Do these uffish historians really think that Stalin had greater respect for people because he was indiscriminate in his slaughter? In either case there was industrial scale planning, careful execution, and attempts to cover up and downplay the result.

One was our political ally. They other our sworn enemy. Nevertheless their guilt is certainly equivalent. People who think otherwise...well, they are morons who can't distinguish between actual moral categories so they make up their own.

A related note: the world of entertainment and story-telling in the U.S. has a noticeable segment of Jewish people in it. And it contained many friends of the Communist movement.

Is it any surprise that feature films, war stories, and the cultural mavens treat the National Socialist (Nazi) government of Germany as the ultimate evil? While our culture has a large blind-spot about similar evils perpetrated by Stalin?


**Afterthought: once, while discussing World War v2.0 with people, I made a reference to Hitler and Stalin starting the war as allies, and switching when Hitler decided to take on Russia. The other people present--one of whom appeared to be of Russian birth--all reacted with surprise. "Hitler and Stalin were allies?"

Is this something that most popular histories simply gloss over? Do histories written in Russia ignore the Molotov-Ribbentrop pact?

Does history-as-seen-in-popular-culture do the same thing?

SJ, there's also the part where war movies are dramatic. And nobody, to my knowledge, has made a movie about the Communist mass killings by the Soviets or the Chinese.

Unfortunately I feel I must make a supporting case for something I despise: "hate crime" laws.

I think the analogy is with conspiracy laws. The act of collaborating makes the crime more extensive and more dangerous.

As far as I can figure, the rationale is that if one group is hostile to another, even minor threats, supported as they are with the implicit hostility of the rest of the group, are more dangerous. One youth sitting on your car is one thing, but if you know he's part of a gang that's another.

I've never heard this stated explicitly--in fact I've never heard anybody attempt to give a rational argument for why such laws would be necessary. I'm not sure if it is because the proponents I've heard haven't been particularly thoughtful or because a lot of people would find the reason deeply offensive. ("Are you trying to imply that _I_ am hateful?")

Of course I could be wrong, and the whole idea is to give extra protection to politically connected groups. I'd hope that our betters would maintain at least some intellectual fig leaf, though.

Sam, I think the left leaning of many in the arts and entertainment worlds is indeed part of the issue*, and the greater representation of Jews in some sectors does make the Nazi fear greater. But we also just didn't much know a lot of the information. American and British troops didn't go far into Eastern Europe, and the Soviets shut down information exchange. A lot of Polish, Ukrainian, and Lithuanian information is only now coming into play. One Day In The Life Of Ivan Denisovich did not get published in the West until the 1960's, and it wasn't accompanied by much else.

*It's one of the major themes of my "Tribes" series that dominated the early years of this blog. The Arts and Humanities Tribe is generally liberal.

James, I don't buy the analogy with conspiracy laws.

Conspiracy laws say that several people worked together to commit the crime. It's about WHO, and HOW MANY -- not WHY.

Hate crime laws say that we can know that they committed a crime BECAUSE that FELT this way. The number is immaterial. Only whether what they FELT was hate or not.

You can certainly make a case that both Joe and Adolf were the heads of the largest murder conspiracies ever concocted. Both of them. At a certain point, a few million difference here or there may have been only a matter of opportunity and circumstance, not intent. Try them on that and find them both guilty.

Tougher to make the case the Adolf hated more. You can't really say that Joe's heart just wasn't in it. Try to get a harsher sentence for Adolf and I think you will have a tough row to hoe.

Now, to bring it back to the actual hate crime laws you are trying to defend. My guess is that you have not heard a rational argument is because there isn't one. To threaten someone verbally or physically is assault. To strike someone is battery. We already have laws in place that apply to the behavior.

Reminds me of the recent discussions on the puritanism of liberals.