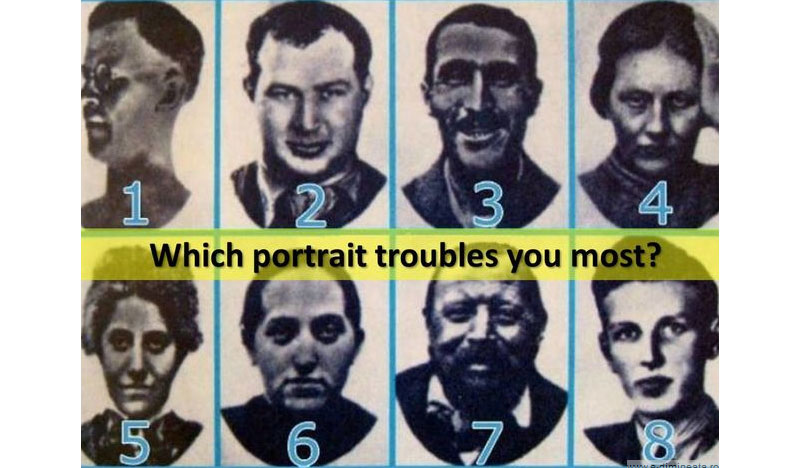 This projective test was popular in the 1940's and 50's. The theory was that people chose pictures that revealed their inner character. 48 photos, six groups of eight, were shown to subjects, who identified the people they most liked and disliked in each set. But the photos were specifically chosen to display people of strong pathology, say, extremely depressed or manic. The subject was believed to be recognising something about them at an unconscious level, choosing those who were like him in some way.

It's an interesting idea, and many of us who deal with both the mentally ill and still photos of them like to think we can diagnose from appearance. I don't know if that idea has ever been tested, but the specific theories of Lipolt Szondi have pretty much been shot to pieces. Szondi was a Hungarian psychiatrist who taught a form of depth psychology. He believed there were four axes or vectors in the human personality (We always divide the personality into fours: the four humours, fire/water/earth/air signs, blue/red/green/yellow, Myers-Briggs, etc). Szondi's were catatonic/paranoid, depressive/maniac, epileptic/hysterical, and homosexual/sadistic. Only depressive/maniac would now be regarded as generally opposite ends of a continuum, and even that would admit of exceptions, such as agitated depression.

In particular, I'd like to see him try to sell the idea of sadistic as opposite of homosexual these days. I imagine that formulation was based more on his theories of drives than on uh, empirical evidence.

You can look at the cards and decode the drives from the letters above the right corner of each photo (use "k" instead of "c" for catatonic). These letters were not visible to the tested subjects, BTW.

I knew a psychologist in the late 70's who still used the Szondi profile, even though it was not approved. She had been trained in Prague in the late 30's before she and her family were sent to work camps by the Nazis. She was entirely unmoved by what others thought of the test. She liked it and thought it valuable, so she used it. The test is still used in parts of the world - Brazil and Japan especially, for reasons which I cannot intuit.

Here's another oddity associated with the test. Independent Austrian filmmaker Kurt Kren made "48 Kopfe aus dem Szondi Test" in the late 50's - one of those B&W depersonalised artistic frauds we thought were significant then. The entire film is shot of the 48 heads used in the Szondi.

The Szondi Test is alive and well at leopoldszondifourmorg and with links to take the test are in my Blogroll at fateanalysos.com. Where allso I keep alive "Self-Analysis" without any therapist except yourself.Nore or lrss as Karen Horney,also 1940 popular pro-femminist and psychoanlst
proposed it should be done if you are not truly mind sick and just neurotic like most people.

I'm interested in the Szondi test from the point of view of photo theory.I appreciate the Assistant Village Idiot's comments. I'm amazed when intelligent people tell me they can psychoanalyse using photos of human physiognomy.

Pretty tale. Tends to make myself desire to be much better. Thank you for discussing. You're great.

I find none of the people in the photos particularly dislikable, but the lighting is horrible. Photo manipulation wasn't invented by Adobe.

I would be surprised if experienced folk were unable to diagnose a number of conditions with fair accuracy on sight--with a couple of caveats. If the person is of a different enough culture(*), some of your cues will be wrong. And if the person bears identifying tattoos or MAGA hats, that could well bring the clinician's biases into play.

It seems worth a study. Of a group with agreed-on diagnoses, take several photos (and take photos of the physicians and photographers and their spouses as well) and show the best and worst photos in sets to a large group of other psychiatrists. I suspect there'd be a non-trivial error rate, but that the results would be much better than random.

The guy listed as Number 2 bears a strong resemblance to Yuri Gagarin.