In a sociology experiment, eight people were dropped on a deserted island: two Danes, two Finns, two Swedes, and two Norskis.  They were checked a year later to see what had happened.

And the Swedes were still waiting to be introduced to each other.

The joke is founded on there being associations with the other three types of Scandis, which leaves the Swedes holding the bag, but the principle is true of all of them, especially the Finns. My habit of striking up conversations with strangers worked a little in Oslo, but otherwise only at the English-speaking Anglican church in Bergen.  I am assured I would be a fish out of water in Finland.

This is important to remember when looking at what the Johns Hopkins study claims to be saying - not, and I cannot emphasise this strongly enough, even though it's useless, what people are saying that it's saying. What they are calling a "lockdown" varies from study to study, and they took no particular pains to correct for that.  It seems to mean "whatever the hell this particular researcher wanted to call it." This is especially strange in that they started with over a thousand studies and screened out all but 34.  I have not looked at what happened there, but how do you screen out 97% of the studies and still have this much variance? What in the world were they taking out?

I should feel some vindication here, because I have long been saying that mandated lockdowns are not the same as voluntary shutdowns are not the same as people individually modifying their behavior. Conservatives should be well-placed to understand this difference, because it is the same as their gun control argument: the law you pass doesn't influence behavior anywhere near as much as predicted. People's behavior depends much more on the people. That gun laws don't work doesn't mean that responsible behavior and gun safety aren't important. But I don't feel vindicated, I wish I were wrong and it was simpler and less prone to misinterpretation.

The Johns Hopkins study specifically notices some countries that have good covid mortality numbers, and these include Scandinavian countries.  They go on to claim that these are generally not so much lockdown countries.  Yeah?  Tell that to my son in Tromsdalen. He did get to go back to work fairly soon in the process, but people are sharply segregated by building now, and there has been rescheduling so that only one or two people are in a location at a time. They still have two week quarantine if you return from another country, which is why he wasn't here for Christmas. Some restaurants have reopened, but there are not many people in them because Norskis don't go out to eat so much themselves, it's mostly the tourists - and there are no tourists. Norwegians get together, if at all, in small private groups. That's not Oslo telling them that, that's who they are plus company policy. As for the Swedes, they had terrible numbers at the start, seemingly related to the large number of older citizens in retirement homes. They have also argued a lot about what shall be mandated closed and what left to choice, sometimes doing one thing, then another. (As of a year ago they also had a problem with one of their immigrant groups, the Somalis, mostly ignoring all restrictions because they believed only white people could get covid.  I don't know where that stands now.) But apparently, their open society looks more closed down then our locked down one, and their numbers are good.  Because that's who Scandinavians are.  They are civic-minded and will line up to do the right thing (even when it's the wrong thing), and they are comfortable mostly staying away from each other. Assuming that will translate to, oh, New Orleans or Nashville for examples, doesn't seem like a good bet.

Yet I am already seeing people saying "It proves that masks don't work, and lockdowns don't work, and distancing doesn't work" and even few saying "and vaccines don't work," though non-pharmalogical interventions were the specific focus of the study. Still a man hears what he wants to hear and disregards the rest. I haven't dared to go look at what is being said at other sites this morning.  I suspect Zerohedge and Gateway Pundit will draw wildly overstated conclusions, because like Scandinavians and isolation, that's who they are and that's what they do.

If you want to say those things don't work, then you now have to come up with another explanation why Vermont and Mississippi have such different death numbers, or why Eastern Europe has most of the highest-death countries in the world at present. There ain't no free lunch here.

Not only that, but there is this chart from the meta-analysis, which for some reason only includes 11 studies, still with variation of meaning.  The possible working definition of "lockdown = stay-at-home orders" was suggested to me this morning. Some studies show large effects, some show none. Everything has a study that shows it's important, everything has a study that shows it isn't. The other ill-defined category seems to be "business closing," which seems to mean bars and restaurants at minimum, but sometimes seems to mean more. I apologise for the poor quality.  I'll try and find a better version. 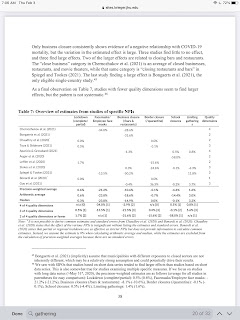 Notice that face masks, closing bars and restaurants, and border closures seem to work - but we are down to 2-3 studies each out of a thousand with little or nothing reported from the others, so I would hesitate to draw much conclusion. Only one study said school closures work, but that one said they work a lot.  So what's that mean? But in keeping with the theme of my post here, some of these studies are measuring something where the government action - border closing, school closing - is likely a controlling factor, while others, especially masks, we don't know at all what the underlying behavior is.  Are these mostly people who get masks right?  Do they ignore the rules or shade them at the doorways? We can't tell, we only know what the government told them to do.

Posted by Assistant Village Idiot at 9:55 AM

Indeed. International Covid comparisons also resemble gun control arguments (and other simplistic/tendentious international statistical comparisons, e.g., US vs. Cuban infant mortality) in the broader sense that data gathering practices may vary so much between countries that what's called apples vs. apples is often apples vs. oranges.

Coincidentally, Sweden declared today that COVID-19 is no longer “socially dangerous,” and that they are ending remaining restrictions.

It mkes sense, because a lot of their population is going to continue to mask and distance for a long time anyway. Some have been distancing all their lives.

Maybe Chris will be able to come from Norway soon, or we can go meet him somewhere else in Europe.