It is a defunct section of Manchester.  No one calls it that anymore, and it is barely even there. It was even called just 'Skeg by old Manchesterites when I was young. Yet it was already on the way out then.  The Everett Turnpike came in in the late 50s (I assume.  Everyone still talked about it as this inconvenient new thing when I was a boy), pretty close to the Merrimack River on the west side, which was the bulk of what we called Amoskeag.  In older times the eastern side for about a block or so away from the river was also called by that name, but that went away even earlier.  For openers, the elementary school district only had kids from the West Side, as it just seemed wrong for little kids to be crossing the river to go to school, especially in bad weather, when Straw and Webster Schools were right nearby. Then the train stopped picking up and dropping off passengers at the Amoskeag Station on the east side after the war, and 'Skeg just became that narrow strip between the river and the highway right around the bridge. Pretty much "between the devil and the deep blue sea" and then the school soon closed as well.  They didn't want kids going over the highway either. It was a nightmare to drive and still is, with the exits stuffed into small tight places. Still a terrible merge. 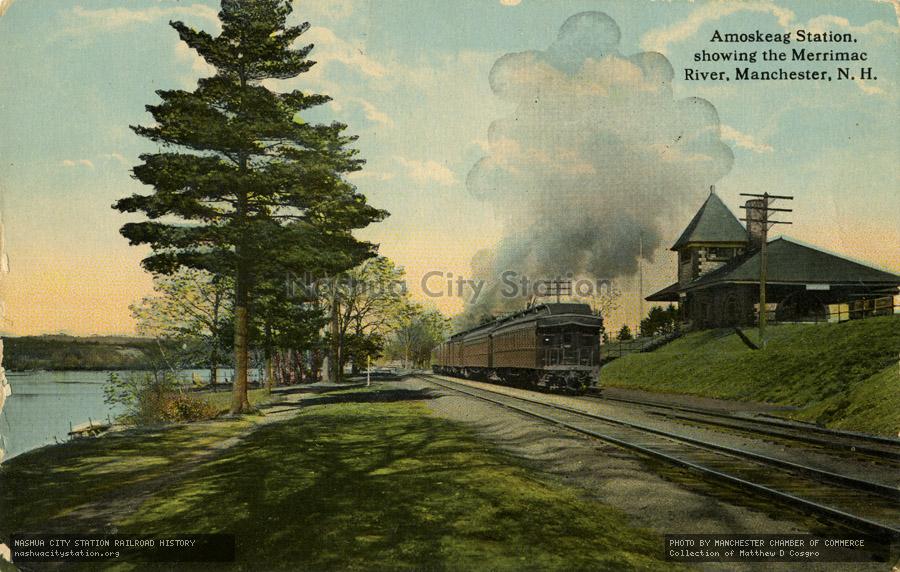 The station is a private residence now.  Very private.  I grew up in the neighborhood and never went down there. Very infrequent trains went through all the way to Concord for a long while after, but no longer.

The school is still standing, used for a while by the district as a learning center of some sort, but eventually sold.  This charming piece of public art attached to it came in in the 70s or 80s and I have always loved it.(Click to enlarge) 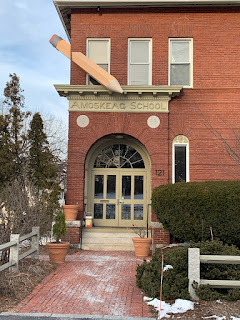 Long, long ago there was an Amoskeag Tavern, visited by Lafayette and by President Jackson and still commemorated with a plaque.  We are big on plaques here. (Click to enlarge) 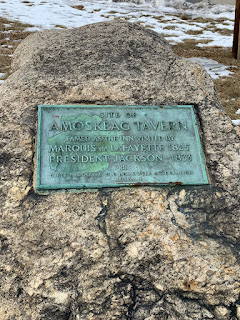 But for us the excitement as children was going across the "singing bridge" to the A&W, which my mother could seldom afford and was a big deal to get a Baby Burger. It was run by the Plourdes and like everyone else, it seems, my grandmother and her sisters could tell you their whole story. And later, when we were allowed to know the story, there was the abandoned store which we vaguely remembered being open, Hank's Sports Shop, with fishing and hunting gear. Hank was Henry Piasecny, known by many of my mother's friends, who shot his ex-wife and her boyfriend and was sent to the NH State Hospital as an NGRI, getting out three years later in the 1960s.  It gets stranger, as he died suspiciously about a decade later, with his daughter Susan insisting he had been murdered. She was so persistent, and eventually provided such good details about where he was shot that they dug him up and by golly, the bullet holes were exactly where she predicted.  She was eventually convicted of the murder and she was sent to the State Hospital.

Update:  I had never known. Why was this not general information? His brother was Thaddeus Piaseczny, better known as Ted Hebert (their mother was born Karolina Herbut), who was a big band leader and ran a music store in Manchester, one of the two main ones, the other being Nuttings.

Of course I know more about the story over many years and many life changes of Susan's. She was a favorite topic of hospital staff for decades. But that's about all I can say.  I believe she is still alive and living in NH, probably about 75.  Calvin Trillin wrote up the story for the New Yorker in 1978, and a girl from a year behind me in school included other details in her book Kookooland, which I somehow have neglected to mention or review. The store stood empty for years, right next to the bridge and across from the Fishways and the Holiday Inn, just above the Amoskeag Falls and the power station.

There's an old cemetery and some houses up Front Street, but the highway, the expanded bridge, the decrepit store, the radio towers...not enticing real estate.  There are some new apartments there, because it is waterfront, but people with children tend not to move in.  Live next to a powerful river just above the dam, with no open areas to play in and an Interstate on the other side - what could possibly go wrong with that?

If you look up Amoskeag now you can find out about the Amoskeag Mills - a very big deal and employing 17,000 souls in its heyday making textiles and steam engines.  I worked in one in its transition years of figuring out "who the hell can we sell this building to." Or the Amoskeag Falls, where the Penacooks used to fish and had part-time settlements on the bluffs on the east side, where the Straw Mansion was eventually built.  You could still find arrowheads there when I was a boy, though I never did.  Such things take patience. The article is by another person from a year behind me, John Clayton, who now runs the Millyard Museum for the historical society. I get mentioned in one of his books. Manchester metro area is 250,000 people, but Old Manchester is still a small town. John and I are both Old Manchester.

Or you might still find some Amoskeag rifles made for the Civil War on a Colt contract on your search. That's getting to be a stretch, though.  Even we don't mention it anymore.

A few other businesses still cling to the name, but who cares, really? Amoskeag is gone, leaving only a few ghosts.

Grew up in Methuen, down river. My mother's family are French Canadians, who came down to work in the mills. My maternal grandfather was a steam fitter in Methuen Mills. Went to St. Monica's on Broadway. Saw on French priest and nuns until we moved to Boston.

My father's mother and father came over from England in 1910/11. According to the 1930 census, he was a washerman in a laundry.

Most of my rather large family is in southern New Hampshire, in Salem and Pelham.

I remember the area and the bridge. Always loved the sound of the name.

@ sykes - I remember around 1970 reading the projections in the Union Leader that Londonderry and Salem were going to become among the bigger populations in NH and laughing about it. "Salem? They don't even have their own high school! Same with Londonderry. Cow towns!" Boy was I wrong.

I have a brother-in-law in Methuen and my younger brother used to live there. Nashua, Lowell, Haverhill, Lawrence, etc were built on the water power and transportation of the Merrimack, but Route 93 was what really pushed Methuen and Salem way up. No more racetrack though.

You do a good job of describing the old community, and the way it dwindled as time went on.

My area has such stories, even if they aren't quite the same.

There are neighborhoods that were cut apart by freeway projects. There are areas where towns were merged into neighboring cities, but the old school district was left untouched...or vice-versa. There are old school buildings that are now some sort of community center, or have been converted into some other use.

There are towns that used to be a stop on the stagecoach/bus trip from City A to City B, that are now swallowed up by the suburban growth around one of those cities. It used to be a distinct community of its own. Now it looks like a slightly different section of a busy main road; the most interesting feature of that section being architecture that is obviously seventy-five years older than other section of the main road.

And then there are the towns/neighborhoods that used to be home to a major company or factory, and that business is now gone.

Wish I had more to say: thanks for posting this.

@ SJ - I did a series called "Only on the Map" years ago about places in SW NH like Scotland or Noone that are just sorta kinda places you can identify as "something" as you drive through, but they are right there on the map, leftover markers of earlier mapmaking, but not even recognisable as places to the new locals. We leave about a mile from one of those now, Grasmere, NH. There is a closed variety story, a rotary, a Methodist church and a Baptist one, and a preschool in the old Grange hall. Across the small river there are still county buildings, but people don't really think of them as Grasmere anymore, nor refer to the area that way.