Two things here: First, the short video by Nicholas Nassim Taleb about the mathematics of risk is good. Second there are Diego Zviovich's linked graphs about VAERS reporting (that is, reporting negative following effects from vaccines). 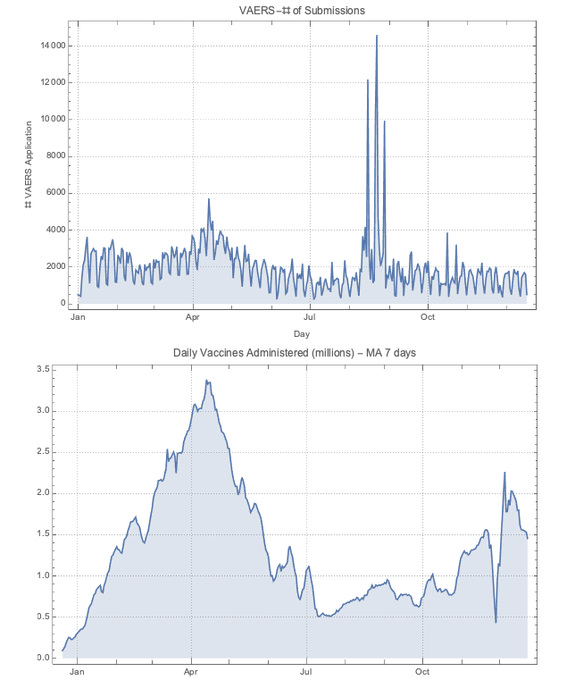 Notice that the number of negative effects reported - a broad category, including everything from a sore arm to death - tracks the number of vaccines given at first. Still pretty small, but it's there. Which is what is sensible and we would expect.  Then there is a bizarre spike in late August, when the number of vaccines given is actually near the bottom.  What gives? The quickest correlation is that that was the height of the controversy about mandates, when discussions of it were in the air all the time. So there is a very good chance, unless some other explanation presents itself, that the reporting correlates with politics, not health.

There can be a couple of reasons for this.  It could be that this is the height of panic, that people are saying "OMG! The vaccine is far worse than I thought! I must tell the other members of the flock!" Social pressure could work both ways on that.  People who felt bullied into getting the vaccine might be motivated to say "See! I told you so!"  Or they might be surrounded by those who are more vaccine-opposed telling them "You have to report this." OTOH, these are people who eventually decided to get the vaccine who might feel a need to justify that and tell themselves it was the right choice, and so downplay symptoms and not report them. It all may be only because people notice more symptoms when the subject of side effects is in the air. The key item is to note that it was unlikely to be more symptoms.

That seems more likely to me, since the politics is ongoing but the distribution reverted to the original shape

August was also when the CDC started to recommend booster shots. Admittedly anecdotal but the booster shots my wife and I got this week triggered a much stronger reaction than our first two doses. Nothing I personally would have called VAERS about but it was definitely unexpected since we've rarely had strong reactions to influenza vaccines and the first two COVID doses were pretty uneventful.

@ James - expand on what you mean by QA measures.
@ Christopher B - interesting possibility. Yes, that could be. But how likely is "death from booster" going to happen in people who weathered the first 2 vaccines without much problem? Admittedly, that is moving the goalposts from what I started with, yet I think it is still a valid question.

I have read that adverse reaction to the shots increased with the number of shots. I can’t remember the source, so the best I can say about that is that it makes sense: the reason vaccines were said to be unlikely to produce serious ill effects was that the chemicals are quickly cleared by the body and dosage is usually not repeated. If it in fact becomes regular, then adverse effects would be expected to increase as more doses were added.

That said, VAERS is obviously unreliable. I had adverse reactions including swelling and stiffness and did not report them. Nobody knows the quality of the data. It’s almost useless.

WRT quality control--I can think of a few things that might cause problems, and those familiar with the actual process can think of more.

Contaminated reagents. Those are supposed to be continually tested--but I don't know at what sampling rate. I doubt that they make everything in-house--probably they import some things from China.
Related to that is testing failure. If your testing system has problems for a while, it could let bad stuff slip through.
Poor temperature control at some stages of the fabrication. I'd think that would have more to do with efficacy than side effects, but it depends on what their process is.
IIRC the Pfizer and Moderna had to be refrigerated--was that always complete end-to-end?

When you change fabrication procedures or bring new plants online you need to be extra careful, and if the highups force corner-cutting... (See Challenger disaster)

I think one of the ongoing issues with VAERS data is that there actually is no quality control on raw reports. Anyone can submit a report, without even knowing the person they are reporting. Anecdotal, but I saw some anti-vaxxers bragging about reporting events they read about on Twitter. I have no idea how widespread that was, but the most recent research I read said that when they reached out to the reporting person only 20% responded with a death certificate or any information even confirming the death occurred. Good thing to keep in mind when someone quotes VAERS data.

As for boosters...seems plausible. However, the only boosters that were approved in August were those for severely immune compromised people. By September 1st only about a million people had gotten a booster dose:
https://www.reuters.com/business/healthcare-pharmaceuticals/us-administers-3702-mln-doses-covid-19-vaccines-cdc-2021-08-31/

Now they were the sickest folks so it's possible they also had the worst reactions! But such a huge number on what look to be just a few days suggests some sort of bot/coordinated effort/data dump. I think you can pull a raw VAERS report, would be interested to see what those particular few weeks looked like.

Whoa. three comments in rapid succession. I will bet they overlapped and may not have seen each other.
"...would be interested..." well, yeah, wouldn't we all? But few have that level of obsession. Fortunately, there are those who are even more obsessed/OCD/Aspie that thou Bethany who will do that work for us. Let us know if you hear anything.

@AVI, 'death from booster'? Not quite but we both felt like we'd been hit by a truck after mild reactions to the first two.

As James noted, the politics continues but the reporting dropped back to normal, though people do lose interest in things, even fanatics.

There's also smaller spikes in late October, which roughly tracks the recommendation that people under 65 get boosted but as far as I recall does not correlate to any renewed mandate controversy.

You know me too well.

So I looked at the data. This was either some sort of data dump/data processing thing or concerted effort to solicit reports in one day. A few notes:

2. While there was a huge increase in reporting, there was not an increase in death reporting. For example, on August 15th there were over 10k reports and 4 deaths reported. For Feb-Dec, the percentage of all reports that involved a death hovered around 1.5%. For the 4 days in question it was a tenth of that....86 cases out of over 47k reports.

3. To James quality control idea, most of these reports were not actually about vaccines given in August, or even July. About 4.5k of them were reports of side effects from vaccines given in January, triple the number of January vaccine reactions reported in July. 10k were reports of vaccine from February, 13k from March, 7.4k from April, 2k from May, 577 from June, 829 from July, and 1676 from August. 6.5k had no date associated. A bunch had clearly implausible vaccination dates, some appeared to be people putting in their birthdate or things like that.

4. Only 29 reports mentioned a booster.

5. 80% of them note they were reported by a consumer, either the actual person or someone who was reporting for them. In July only 20% were.

6. Some number of these reports are actually people reporting that they have COVID/a vaccine failure. In August that was probably more noteworthy than it is now.

7. Sorting the results by vaccine date vs report date shows a pretty consistent 25k reports/month since June. The exception was July, which dipped.

So a couple possibilities for what was happening here, but it was interesting to comb through the data anyway!

Bs King suggests that I was overly harsh. It is possible to know something about the quality of the data; in this case not anything very reassuring. Still, ultimately I think it's right to say that nobody knows how many things get left out, or how serious they were, even if you can say something especially troubling about what got included. It's just not an especially useful resource.