I can't find an overarching theme, or a coherent narrative to my Norway trip, so I thought I would just launch in and comment on things bit by bit. I very much liked the Norwegians I met, though there were a few moments of stereotype-confirming interactions. In a line-waiting conversation with a couple our age with a Norwegian husband and American wife, the subject of driving an RV came up - I forget how. The gent commented that one needed a special license to drive one in Norway. He segued immediately into "10% of the cars in Oslo are electric now.  They get 10% cheaper every year." Oh. Sorry to bring up terrible gas-guzzling American vacation habits. (We later learned that lots of people drive RV's up to Tromso from Europe farther south, over 2,000 miles.  Yeah, Tromso is way up there.) I made a comment about recent improvements in batteries and let it slide. We were still in Boston, and I wondered "Dear God, it's not starting already, is it?" A waitress in Tromso told my son to take his jacket of the back of his chair and hang it up.  That sort of thing. But very little really.

My sons friends up north tended to be more rural and blue-collar, and they didn't seem very different from a lot of Americans in attitude. They were older, however - Chis is turning 30 but most of his friends now are 40-70, perhaps seeking local parents - and they live out on Kvaloya Island across the bridge from Tromso.  Oddvar is about 30 and a commercial fisherman and has a very strong grip when you shake his hand.  I very much liked him.

So my sample isn't representative. Still, a few things. The official statements in museum films and exhibits, or the promos on Norwegian Air were quite multi-culti, stressing how wonderful it is that Norway/Oslo has so many different cultures now. What they mentioned was the variety of food - which no one on earth objects to, and I suppose is a nice advantage in life.  They didn't find anything else to mention.  I recall this from conversations with New Yorkers and other fans of big cities, dating back to college.  Their place is so vibrant! Such a variety of people! And...food! (List foods here.) And different clothes! Then that seems to be about it. So too Oslo, Bergen, and Tromso, which were the places we went. The exhibit on religious groups reported thoroughly on all the Tromso groups: a pocket of Russian Orthodox, some nuns that came up to start a clinic in the 20's, a Bahai group, a very conservative Lutheran Laestadianist movement popular with the Sami,  a non-denominational prayer group of city employees that meets at City Hall every morning, a few others.  Some nice pictures from the city's history of Church of Norway - old churches, confirmation.  The associated quotes were how much people liked the tradition and belonging, and having faith, but they weren't so sure about the doctrine.  They thought maybe everyone was okay now, not like in the old days.

These official sources were quite excited to tell you about having Muslims there.  The quotes from Muslims were all from wise little girls who loved everyone or men who stressed how hard-working their people are.

The everyday people were a little different.  When they found out we were Americans they were very comfortable telling us, after an exchange of pleasantries and their mention of having visited or having relatives in America, how the (ahem) people who are moving here now just want to be given things.  They don't want to work and they don't want to follow Norwegian rules and customs. The Norskis I spoke to don't like "what's happening in Sweden" and very much want to stop that from happening to Norway. It is apparently taboo to say who they mean exactly.  Yet if it's Americans they are opening up to so quickly, I'm betting it's not the Slovakian bartenders they are worried about.

I'll have a later comment about their considerable reluctance to talk about anything religious.  It seemed to be a cultural privacy.

They were careful not to say anything that might offend us, but I did get hints at the resentment of American culture invading and changing the place.  Even though they have largely invited the individual components, it does remain that everyone speaks at least some English, and they use English to speak with people from most other countries as well.  We saw a Japanese girl stop a young man in nautical uniform for directions in Bergen. I only heard the parting, but she said "Thank you. Bye. Have a nice day." Not only American tourists, but other visitors and the Norwegians themselves have clothing with American place-names.  New York, Tennessee, Chicago, Alabama. Our popular culture seems to have greater place than theirs in the stores.  Though the McDonalds in Brygge is in an historic building, it's still a McDonalds.  I got some sense of why they feel just a touch put out.  We would too.

Last unrelated point:  A woman at my college who was not much liked by other women returned from Junior Year Abroad and declared to a partying table of six couples "American women really are the most beautiful in the world."  The other women perked up their ears, suddenly liking Barbara a little better than a few minutes before. She went on to say that European women have the reputation for being better-looking, but it is largely a function of style, dressing and making up more carefully, etc.  I have remembered this on all my trips to Europe, and it may not be true, but there is something to it.  The Norwegians are an attractive people.  The men have sandy hair, seldom going to extremes of long hair or shaved heads, their clothes are a bit more formal than ours. Dark suits, off-white wrinkly shirts, no ties. Few are fat, though fewer still are skinny as you might see in America. Hard not to envy them.

It is similar with the women.  They dress up a bit more. For genetic reasons their hair is straighter, blonder. They wear it longer than Americans (though never 1960's long).  They also are seldom fat and never skinny. They have the type of hair and dress we instantly associate with "pretty girl" in America, but when you actually look at their features, not entirely so.

All in all, they look like alumni weekend at a mid-range American prep school. Comfortably nice looking, rather than stunning or glamorous. Perhaps I am a little negative about it because there is a lot more similarity among them than in an American or any Anglospheric group.

Their houses give the same impression.  They are tidy, attractive, well-kept and most Americans would feel quite comfy moving in.  Yet they are very similar in style and stick to the same colors:  white, brick red, mustard yellow, brownish-green, and a grayish blue. They use the same five for trim colors as well. As above. Colors both dramatic and subdued, somehow.

They have used the same colors for centuries, apparently.  Brygge, on the harbor in Bergen, dates from the Hanseatic League (The buildings are reproductions.  The placed has burned to the ground a few times.) 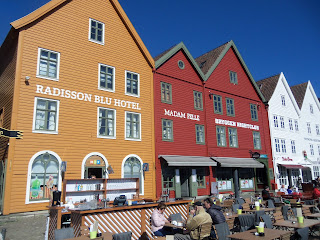 Yet if it's Americans they are opening up to so quickly, I'm betting it's not the Slovakian bartenders they are worried about.

Slovakian bartenders? I would feel right at home. My NE hometown was about half Central/Eastern European. I consider Germany to be Western European, though Prussians might beg to differ.

They might have a conniption fit from an attack of cognitive dissonance.

Bruce Bawer has written some interesting stuff about Norway.

They were careful not to say anything that might offend us, but I did get hints at the resentment of American culture invading and changing the place....I got some sense of why they feel just a touch put out. We would too.

In Latin America I met some people who were better informed about American pop music than I was.

As my previous statement was misinterpreted, I have modified it:

I wonder how "progressive" Americans would respond to such statements from Norwegians, about "people who are moving here now," given that among other things the "progressives" are informing us that 1)Scandinavia does it better than the US and 2)"progressives" are not "islamophobic."

That is, I wonder how an American "progressive" would respond to hearing from a Norwegian, who is according to the accepted narrative, a citizen of a more progressive, more enlightened country than the US, make a statement that could have come out of the mouth of a "deplorable" in the US.