In resonse to the many cries for pictures - okay, one cry - of my folk-playing days, I uncovered this. 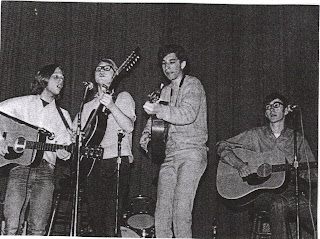 It was actually not a band that played more than one performance, just an ad hoc collection of folkies that rehearsed once. Ted Kontos, Jack Schwartz, Larry Younger, and I. In the designation of the time, then, Kontos, Schwartz, Wyman, and Younger. It doesn't have much of a ring to it that way, so KSW&Y works better.

We were singing "Southern Man" here, a subject high school boys from NH were deeply knowledgeable about then. I hope I was already suspicious that Neil Young's lyrics were a little nuts. Two years later Carroll County rejected doing the song because as my roommate said "Frankly, we haven't heard a lot of bullwhips cracking here at William and Mary." To which Virginian Sam Jones replied "And also, we'll get the crap beat out of us." But I had a great unexpected, underneath harmony to this on the chorus.

If you can't tell which is I, this photo from the same era might help. 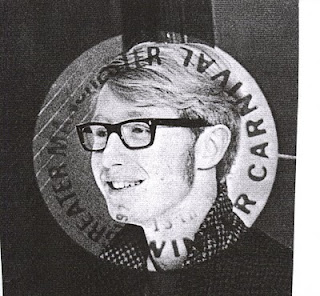 I look at that guy and wonder who he is.
Posted by Assistant Village Idiot at 4:17 PM

So that makes you the one who looked a little like Steven Stills with funny glasses, or your son Ben with the same funny glasses.

Is that guitar a Regular or Extra-Large, or were you really small in those days?

I was the the same height then, but uh, smaller.