Partly Off The Hook

There are a full dozen beautiful places to propose in Williamsburg: Crim Dell, a little back nook behind the St. George Tucker House, the Wren Porch...

I missed all of those and picked a really dumb place to propose. Tracy had once said that she had told me where she had wanted to be asked for her hand. All these years, I thought she meant the little nook. On the way to Williamsburg, she told me it was the bridge over the canal at the Governor's Palace. Now, I would have remembered that, because I don't like the Governor's Palace, and would have tried to find something better that I liked. That is, I would have done a different stupid thing than what I actually did. She admitted she might not actually have said what she wanted, but this was what she wanted. While there, she set me up to propose in the proper place, and Kyle took the picture.

Well, that's a little better. I still have to own terrible taste in romanticism for where I proposed (Camm Dormitory. When Jonathan saw it when he was 16, he shook his head sadly at his father. Pretty sad when a 16-year-old can instantly see your style is lacking), but at least I'm off the hook for not listening, and the Governor's Palace in specific.

And we have this. 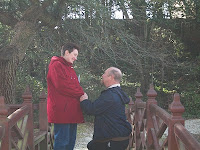 You look rather lawyerly, that is, asking the questions to which you already know the answer.

Dude, even I know that it was supposed to be the bridge. Mom told me in about 4th grade. She also mentioned that you didn't clean your room before proposing.

You're just lucky that you could fall back on your devilish good looks.

The part about not cleaning the room is unfortunately true.

So...are you saying you've been "living in sin" all this time?

Or have I missed something really too obvious?