So, it's already coming in.  I think I had assumed that polygamy was not much accepted yet but might become so, and played out the thought experiment of what might happen.  Apparently I should have checked what is already happening on the ground. One of my sons mentioned a reference to Sister Wives being a large factor, and I don't doubt that (even though I am only guessing from the title what that is - a TV series about the lives of women in polygamous families?), but I think such seeds can only grow in prepared soil.  Tinder is not prepared soil, it is fertilizer.  The prepared soil is the change that has taken place since 1965 in pair-bonding that is not permanent or committed. It looks like the change is happening already. (Underlying article.) 2010 seems to be a break point, so TV can't be the only driver.

Update:  I have had private communications that 2010 is the year for Sister Wives, and also the first year that approval for gay marriage went above 50%.  Is this general cultural change, or restricted to the idea of "we don't care who marries whom?"

Update II: Please see the comment about Sister Wives by Kansas Scout below.  I was going to reply to zir* there, but thought it worth bringing all the way to the top. This fits with what I see as very typical cult behavior, which so often (somehow!) seems to involve the male cult leader sleeping with lots of women.  Because God said so, somewhere.  New revelation. It does seem to attract females who seem almost stereotypically culturally conservative (the politics are usually completely screwy and unpredictable), down to their fashion choices and their need to be told what to do. Let me point out for the 100th time that I know know many these socially conservative women and I'm not seeing a lot of "obedience to husbands" in that happening. Like, they decide everything in those families, and their husbands are fine with that because being left alone is a positive.  My wife reads my blog most of the time and I don't think I will say more, except to...no, I don't think I will say more. I have known some families out on this obedience fringe, and they do gravitate to religious groups that push that. I have always felt if they didn't have this group of Baptists, they would find that group of Mormons, or whatever. Just my impression, but I'm betting I know more of them than those who usually pontificate about this. And Portlandia illustrates nicely how this isn't just those hated evangelicals. I wish I had remembered this uncued.

The soft polygamists have sown the wind. They will blame other factors, because that is what human nature does. We step away from Western Civilisation, even at a personal level, at peril to us all. 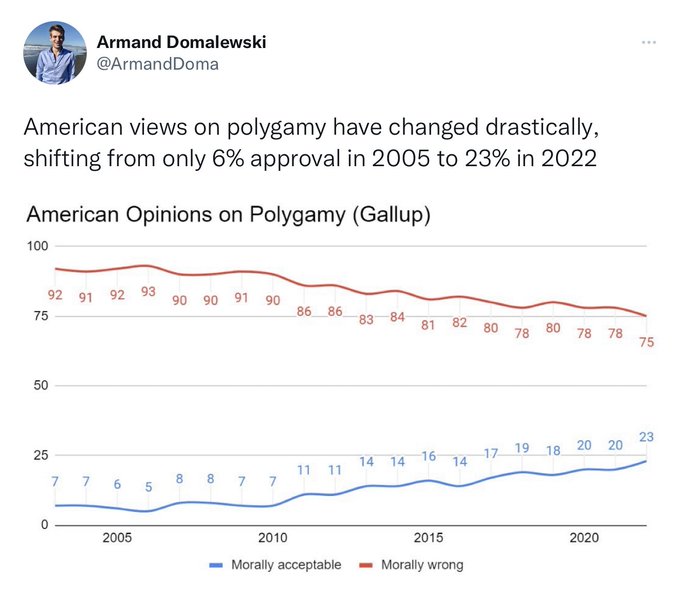 I didn't expect to become the polygamy clearinghouse, but I'm not opposed to it either.  I might tire of the topic eventually, but for now it fascinates.

And then there will be polyandry as well!

I kept wondering about that. One can see how it would logically follow from trends that we see, yet it doesn't seem to catch on anywhere. Is this something different about male and female psychology beyond the superficial level of "humans is humans?"

I might - if I tried really really hard and got a yay or nay vote - be able to share a kitchen and a husband with another woman, but ain't no way I'm going to have two husbands.

Hahaha - Yes, we often feel that one spouse is actually a little too much sometimes, and the idea of doubling down on that seems puzzling.

The Sisters wifes thing is blowing apart. Two have left and more are likely to join them. Its showing itself to be a formula for chaos and parental malpractice. I add that its a good example of a male chauvenist control freak manipulating women. They are now creating the illusion of a continueing group but its clearly untrue. They are all doing this for the money

The polling question from the graph is a little strange. To ask whether it is morally acceptable or morally wrong is to adopt a frame with only two positions, the most praiseworthy of which is "permissible." You get that kind of thing out of Kantians (though not, I think, Kant himself).

I definitely don't think polygamy is immoral, especially not if carried out in the context of a deeply rooted moral system. To say that it can be permissible in the right context is not to finish with the question; one can still inquire into whether it is praiseworthy and honorable; and from there, inquire further into what is most praiseworthy and most honorable. To get to 'not outright forbidden' and then stop is a very strange place to close the question.

Like, they decide everything in those families, and their husbands are fine with that because being left alone is a positive.

I don't think this is the general case with these sorts off families/relationships. From what I've seen over the years there's a division of responsibility, and while the line gets drawn different places, it's usually something like "the woman makes most of the decisions inside the house, and the husband makes them outside". Or it's something like the husband has a mentally demanding job, and the wife takes having to think about household/family stuff off his plate.

And yeah, there's a continuum from women who won't decide what to make for dinner without input, to women who attempt to control every aspect of their partner's life. And you can drop the "wo" everywhere it shows up in that sentence and it still be true.


The moral problem with polygamy is that the sort of man who is willing to share his wife with other men on even an occasional basis is very rare. So polygamy winds up being *mostly* polygyny with some small percentage of polygamy and a smaller percentage of polyandry.

This leads to a (relatively) few men (billionaires and multi-millionaires) pulling enough women out of the mating pool that the men at the bottom will have an even harder time finding mates.

This, across time and cultures, has lead to increasing risk taking in marriage age males as they attempt to gain status (money, fame, etc.) such that they can get *a* mate. Some of this risk taking involves violence.

It is also absolutely horrible for women. This is also documented in the sociology papers. Women in polygynous societies can (usually) be divorced or discarded fairly easily, and this sort of thing often results in women getting married or betrothed earlier and earlier.

There are some men and women who do well in various forms of non-monogamous relationships. I've known several over the years and "freedom" means that they should be able to structure their lives as they see fit.

It can be argued that part of what helped the west develop in the direction it did was the early christian restriction to one man, one wife. This promised the woman a less unstable relationship, took more men out of the marriage pool (thus reducing the risk taking and the violence etc.).

I think your points are excellent, and on the first evaluation of power in a relationship, I have said similarly with friends, though I don't know if I ever have here. I was firing a shot across the bow of the "obedient traditional wives" claim that is often made in the last five decades. Your description is more comprehensive and precise.

I will take at face value your observation that some men and women do well in non-monogamous relationships, because I have certainly known some people who did not show obvious pathology in arrangements that I would find fraught with peril. But i would claim that these are people who have some type of capital to burn, so the expected pathologies don't get to show up. They are very nice and easy to get along with by nature, or have adequate resources, or do not have surrounding pressures that would put too much strain on a relationship. I have friends in gay marriage who did fine - better than most straight marriages - until one got old/sick/poor, and then after a heroic year or two, everything went south. It is like my analogy about Scandinavian socialism (which should actually be seen as social-net capitalism anyway), that it's much easier to share when everyone looks like your second cousin, but the system is fraying now that everyone doesn't. That is not evidence for socialism's strength but for tribalism's