This is what I grew up with. "Scenic" New Hampshire. Neighboring Maine had "Vacationland." I thought I had detailed the historical differences among NH, VT, and ME tourism in a previous post, but I can't find one that includes it. I shall have to do that soon, as it is likely of interest to more than a few. From the first letter, you can tell that this plate was from Hillsborough County.

NH was one of the early leaders in raising revenue via "Vanity" license plates. A man my mother was going with in the 1960's had an Austin Healey with plates that he wanted to be seen at Ski - NH. But only five characters were allowed in those days, challenging the creativity. It ended up as SKINH, which looks like nothing so much as the beginning of "Skinhead." This was merely an insult for bald mean at that point, not a political reference, but it still wasn't the look he was going for. Frustrated, he decided to get SIHUS for his two Siberian Huskies the next year, but it just looked like SINUS at first glance.

My great-aunt had the number 673 until she finally gave up her Superbeetle when she went into a "women's home" around 1977. She had kept the first number she had gotten in the 1930's all along. As people waited in line to get those 3-digit plates as they uh, "became available," folks wondered how she had managed the political pull to nab one of those. It didn't seem possible that she could have had a car, all on her own, as a mere woman in the 1930's. She was a bit adventurous, that one.

NH went to the "Live Free or Die" state motto while I was away at college. I suspect Governor Meldrim Thomson was behind that.

My grandfather, a chicken-farmer/egg man in Westford, MA, had an old plate something like this up in his detached garage. 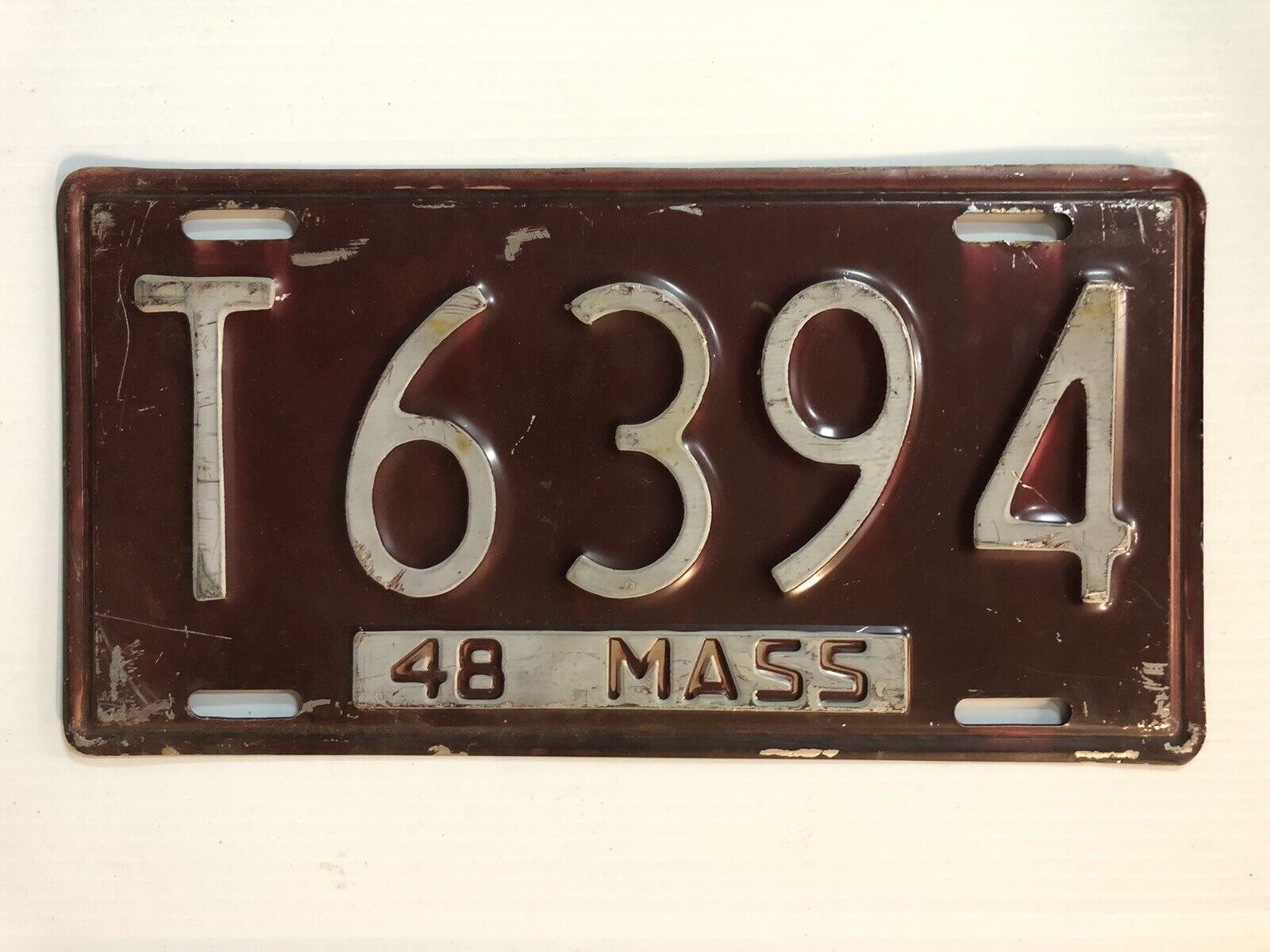 The site Great American Plates is a good resource if you want to know both current and historical plates. There may be an even better one somewhere. Browsing there, I realised I had forgotten that Alaska used to have "North To The Future," which is typical Alaska weird.  The deeper you go, the more you can see how becoming an authority would take some time, like being a birdwatcher.  If there are this many plates just for Montana, the sum total of all the American plates must be hard to keep in memory. 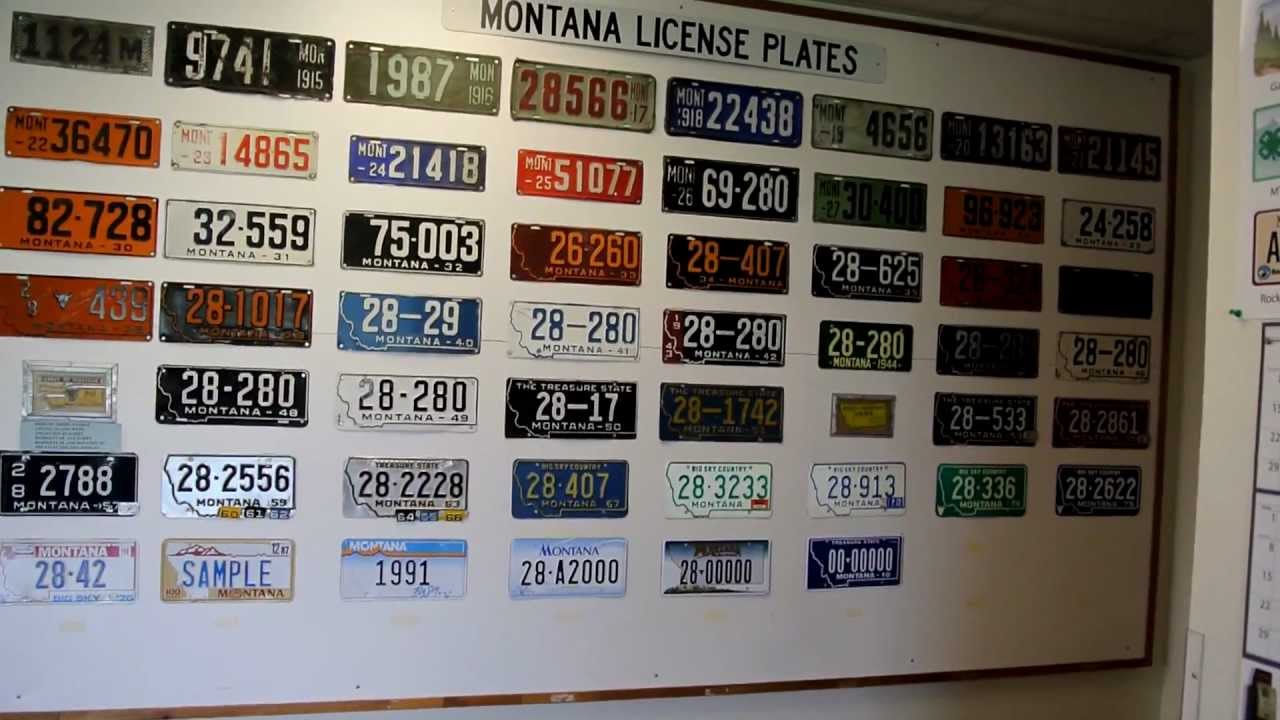 There is a danger in playing the license plate game, as people put frames around them to show their support for a college or a dealership or a joke - seldom a funny one - obscuring the state name. At this time of year, many plates are grey with grey letters also. Trying to see those while driving takes one's attention of the road. That would be hard to explain to the judge, I think. Or the insurance company.
Posted by Assistant Village Idiot at 7:48 PM

My grandfather told me that during WW2, license plates in Illinois were made from soybeans..

Awesome. I wouldn't go out and buy one as a souvenir, but if the family had preserved one unto this day I would consider it a treasure.

Here in Wisconsin we have a wall-o-plates at the DMV that looks just as big. I don't know how police manage.

We also have a series of plates from a few years ago that used a lamination on the metal. Over time and sunlight that lamination has deteriorated, and now I see unreadable plates all the time. The plastic peeled up, and peels even faster with assistance. I imagine this is useful for people trying to avoid paying Illinois tolls.

It didn’t make the plates, but you can see it in the road sign in “Smokey and the Bandit,” which I can attest to from my youth. As you passed the border, you’d see a sign that read: “Welcome to Georgia, State of Adventure.”

And it was, too, in those days.

In 50's, 60's Boston, my dad had to go downtown and stand in line for a few hours at the end of December to buy the then annual plate. Jan 1, it my job to lie in the snow and ice and replace last year's plate with the new one. All the nuts and bolts were steel, and often they had rusted together during the previous year and had to be hammered apart.

The ideas of aluminum bolts and plastic nuts and multiyear plates with stickers was yet to come.