I lost The Little Drummer Boy Challenge on December 5 this year.  I went to a Mannheim Steamroller concert, and of course it was on the bill.  I should have seen it coming.

I was even more annoyed because their version, including the accompanying video, was so poor that I could not even get any enjoyment to compensate. However, analyzing why it was so poor revealed to me a good deal of why the entire concert was disappointing, so it gave me something to think about, and now write about.  So I think it's a fair trade after all.

They have not updated the arrangement since 1988. They have not updated any of the arrangements. This may not be bad in itself, if you created a classic the first time or got exactly what you wanted.  That's not likely when it's every song. Now, it just sounds like they're stuck in the 80's. The world did not go in the synthesizer direction. Chip Davis was creative, with unusual arrangements of older music - lots more drum, synth, bass, and percussion than we were used to. You liked it or you didn't, but it was an attempt at something new. Now they've added a Genesis-style light show and some mostly-irritating videos to musicians performing their CD tracks.

"The Little Drummer Boy" video was about a toy drummer, 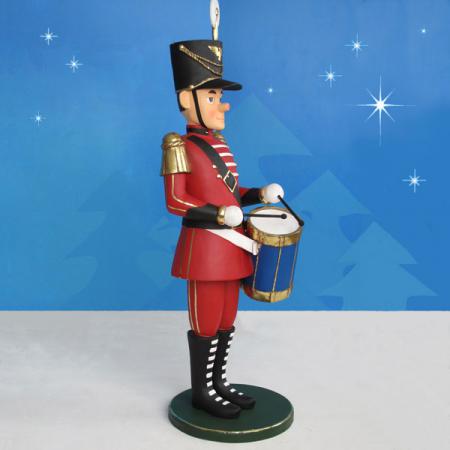 plus a lot of other Christmas toys being woken up to dance and play at night after Santa's elves have gone to sleep. Ah, so you didn't actually listen to the lyrics, then, did you? Davis has always been a bit strong on the Magic of Christmas nonsense and sentimentality, yet I did think there might be something Christian in there. Listening to the 1988 version in that context, with its mechanical effect, it is clear that a toy drummer was his intent from the start.  I'm surprised I never noticed it before.

"God Rest Ye Merry, Gentlemen" has this video of a guy in medieval costume saddling up and then riding a horse across fields.  Hard, as if on some errand. This made no sense. I eventually decided that it was merely a superficial response to the archaic phrase in the title.  It's medieval, doncha get it? So we have this medieval guy. This was confirmed when the video ended at a moated castle, with a baron and baroness waving behind the parapet. When Chip Davis's daughter Elyse sang "Greensleeves," she had green sleeves.  Nothing in her vocal or facial expression showed the least connection to the lyrics. "Angels We Have Heard On High" had this journey through space with ethereal angels in diaphanous gowns looming up repeatedly on the screen, reminiscent of Star Wars - A New Hope just before they would go into hyperdrive. Passing planets on the way, too close together. "Carol of the Bells" had these vaguely demonic modern interpretive dancers arranged on the screen - very 70's choreography.

There was some non-Christmas music as well, very space-and-light-show, techno sound. To which I can only say far out!

We were about average age for the concert audience, maybe even a bit young.  Chip Davis is the Lawrence Welk of our generation.
Posted by Assistant Village Idiot at 11:38 PM

I don't remember when I caught the 'Nutcracker' influence in MS's 'Little Drummer Boy' but I think I did notice the transition from the simplistic mechanical style of drumming to a more fluid human style, and back again didn't really fit the lyrics. I probably shouldn't take too much credit, it may have been explained in the liner notes to the album.

I thought the Fresh Aire Christmas Live album was about the best MS did. It features a pretty full orchestra to accompany them so there wasn't as much emphasis on synthesizers. I think that's also when they did a Medieval Christmas pageant mini-movie. I remember the video you describe being set to 'Fume, Fume, Fume', though.

I feel we still have to give Chip credit for rescuing a lot of Christmas music from obscurity. I think you can run a directly line from MS to Trans-Siberian to the explosion of Christmas radio. You can argue that it's verging on overdone but it's probably better than getting stuck with little more than 'Jingle Bells' and 'Rockin' around the Christmas Tree'.

I found the Steamroller ran out of steam the second time i heard them. Rush Limbaugh used to use them as bumper music, but I haven't listened to him for some time. (Just not in my car at the right times.)

I have no memory of listening to Mannheim Steamroller. IIRC, I had a conversation with a twenty-something son of a cousin, back circa 1990, where he said that Mannheim Steamroller was one of his favorites. I will take the opportunity to listen to them on YouTube.

I thought the original _Fresh Aire_ from Mannheim Steamroller was good in more or less the same way as _Take Five_ or _Suite for Flute and Jazz Piano_: a quirky idea sufficiently well-executed to be noteworthy. And while I can sympathize with the industry wanting very very much to commercialize a series of similar recordings after one succeeds, none of those recordings seem like promising bases for that strategy.

And I'm not religious but I take (what I think is) your grouchy point about trivializing the theme of Little Drummer Boy. FWIW, I doubt it works all that well (as measured by progress toward any likely objective of the trivializers). At least, I doubt that it works very reliably and cost-effectively. It's storing up a minefield of future gotchas for people who discover the trivialization, and it requires (and spends) enough influence that it should be measured against other strategies spending that influence. There's a similar risk in similar secular trivialization as well. In the abstract, imagine someone trying to trivialize the sentiments behind the 1812 Overture by pushing it as a jingle for a _Minecraft_ ripoff. (Abstract because while for all I know something like this has been done, if so, it has been done it's not someplace I've ever run across it.) In the concrete, consider all the attempts at trivialization of chattel slavery conditions in the Anglosphere in the long runup to the wave of influential popular and literary critiques ca. 1850, or the trivialization of Marxist slave regimes kicked off by the Russian Revolution. Even when the attempt at trivialization works in some sense, it tends to create a unstably flammable situation. And a prerequisite for getting to that sort-of-work situation seems to be having a great deal of political power and spending it. It's not clear to me that it's a more effective use of that power than other strategies, even the naive strategy of just brazening it out.

E.g., imagine an alternate history in which the Kaiser's armies ca. 1918 had ended up in a geopolitical situation as favorable for their continued rule as Stalin's situation was in 1945. And then imagine that they had continued holding Belgium with the https://en.wikipedia.org/wiki/Wire_of_Death and forced labor and stuff indefinitely. Would they have been clearly better off with a strategy of pushing fellow-traveller claptrap about benignly rescuing the Belgians from the brutalities of wage slavery, compared to e.g. just going with the kind of because-we-can-because-we-are-strong attitude that we associate with Genghis Khan? (If you have enough fellow-traveller resources to make the first one work, maybe you should use them on taking over even more counterintelligence agencies or something?)

And, finally, assuming that the Latin-or-whatever at the beginning isn't some insidious message that subverts it, the Celtic Woman arrangement of Little Drummer Boy on the album A Christmas Celebration sounds rather like the aesthetic that I associate with Mannheim Steamroller, but without any aggressive trivialization (let's use "molon labe" to label our chewing gum and athletic shoes!) that stands out to me.

Off topic. An article about last year's election in New Hampshire has a cutting joke.The Best “Yo Mama’s So Dumb” Joke of ALL TIME.. The article goes over old news: that New Hampshire's same day registration enabled residents from Massachusetts or other states to drive into New Hampshire, register, vote Demo, and drive back to their home state. Old news. However, the old news came with a new joke:
Yo Mama's so dumb... she lost a rigged election!
With a picture of Hillary and Chelsea.

@ William Newman - perhaps it is the irony that Mannheim Steamroller has made their career out of Christmas. To me, it is a frustration that they didn't take the energy to learn the basics. But the greater criticism may be to the culture in general, which made these shallow versions the new standard. It had been going on for decades, of course, when every singer had to do a Christmas album eventually in the 40's-60's.

I didn't like them then. I like them less now. I'd managed to forget them, so I'm not thanking you for this post! My children would say "Oh, Mom... you're just so opinionated!" Damn right, I am.