Family stories reveal family secrets: a lesson in the accumulation of small clues.

Sometime in the late 30’s or early 40’s, my mother's family was playing the Animal Game on the way to Suncook Pond, when my mother’s team – the driver’s side of the car – won unexpectedly that year. Unexpectedly to her, anyway. Under my family’s rules, you lost all your animals when you passed a cemetery on your side, and her father took a different route at the end that switched a cemetery to the other side of the car. My grandmother was apparently incensed at such perfidy. “I don’t think Louise ever forgave him for that.” It was a “tell” of my mother’s to refer to her own mother by her first name when she was being critical.

Such are the incidents which tell us so much sub rosa about family life, eh? It’s easy to see both sides of this dispute here. Maurice (Pronounced Morris, and not anything French. To my grandmother, that would be important.) knows what’s coming - the team of father and youngest daughter is going to lose yet again this year, because the cemetery is always there. I don’t know how competitive Gramps was, but the rest of our troupe has been a bit insane on that score for generations, and he may have just had it with his wife and her triumphalism at that point. OTOH, manipulating the route driven when you’ve got control of the wheel does seem…below the salt. Not quite the straight bat, is it? A bit petty.

It took some cleverness, I imagine. Maps were much less available than now (as I noted before, setting up this story), and one had best be certain such tricks would work before setting off. It rather spoils your enjoyment if you pull a stunt like this and it ends up getting everyone lost, or stuck in a ditch because the road is treacherous. It would make victory in the Animal Game rather hollow.

This suggests that Maurice had either worked up this scheme driving around the year before and held it all that time, or made significant effort to get reliable info during the year. It rather eliminates the “mere playfulness” defense from his explanation. Plus, Louise hated the extra work of going to the lake. It was rather kicking her when she’s down, then. Yet my mother’s choice of words was telling. Anyone might say, by way of hyperbole, “I don’t think Louise ever forgave him for that,” being humorous. If challenged, she could plausibly maintain that it was just a common figure of speech.

I think not. I think she more than half meant it. My grandparents’ marriage was apparently a bit chilly and distant, though no one would ever make a scene. Gramps was not a talkative man, and Nanna was ultra-conscious of proprieties. 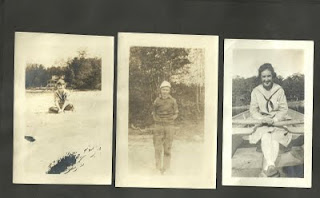 So…on the maps and on my trip up old Route 28, I was checking which cemetery fit this description. A graveyard on the left near the end of the journey which could, somehow, be put on the right by a quick jog and change of route. Nothing matched that. There is one in Barnstead (lower right) where you can miss the cemetery on the left by taking what is now Beauty Hill and Wes Locke Rd. Yet though it puts it on the right, it is 300 meters off the road. That’s not really visible enough for Animal Game use. Did my mother misremember that the cemetery got switched to the other side, when it was only eliminated with a quick jog – almost as good, really?


Well, possibly. But Maurice might have continued up Beauty Hill Rd and cut over the top of Upper Suncook Pond and come down White Oak Rd from the other side. Two miles out of his way. This would not only eliminate the cemetery on the left but put an entirely different cemetery on the right, erasing all Louise’s animals. Additionally, my Aunt Cynthia and/or my Uncle David would be on her team as well, likewise thoroughly pissed, or at minimum, taken aback that their father was capable of such treachery over a mere travel game. This would not be a route one would happen upon by accident. You’d have to work on this.

Here are pictures from the 20’s and 40’s taken at the Narrows between Upper and Lower Suncook Ponds. My uncle notes that my sweet Aunt Marian was at pains to shoo people off her beach.

I was at this cottage only twice I remember, first in 1957, then around 1961, when I was eight. Summer cottages have odd decorations, but one there was Very Odd. There was a little poem about a “pickaninny,” with a cartoon black boy. I knew somehow that this was prejudiced and vulgar, probably only because I knew one didn’t make fun of groups of people, and this was clearly making fun of black children. (I personally resented the making fun of children part, too, because there was some joke in it that I didn’t get. Doubly picking on that poor soul, were they? Well, I never.) My confusion arose from the fact that these were the very people who had taught me this was wrong. Who had initiated this act, and why did the others allow it? Or had I misunderstood? Was this perfectly acceptable via some rule I had missed? Children don’t know.

In retrospect, though, it tells you a little something about the era, my Aunt Marian Smith, and the other owner, Sadie Adams. Schoolteachers, I’d heard.
Posted by Assistant Village Idiot at 7:46 PM

Hi I believe I may have some pictures of the house in the back also I believe the girl in the right picture maybe someone related to me I just dont know how, I found a ton of pictures from my great grandmother Eva Manseau Knight if you give me an email I can send them to you to see if the people are familiar. The pics have "suncook pond June 25 1919" written on them

My email is wymanhome@comcast.net. I would be interested in pictures. We are in Goffstown.

The woman on the far right is Marion Smith, who was a 7th-grade teacher at Webster School in Manchester. She was born in Londonderry. Her mother was She and the Adams's owned one of the original houses near the bridge. She was my grandfather's older sister, and is buried at Pine Grove Cemetery, near the chapel. I believe her sister May married a Cummings. Their mother was the "Nellie" that the lane was named for.