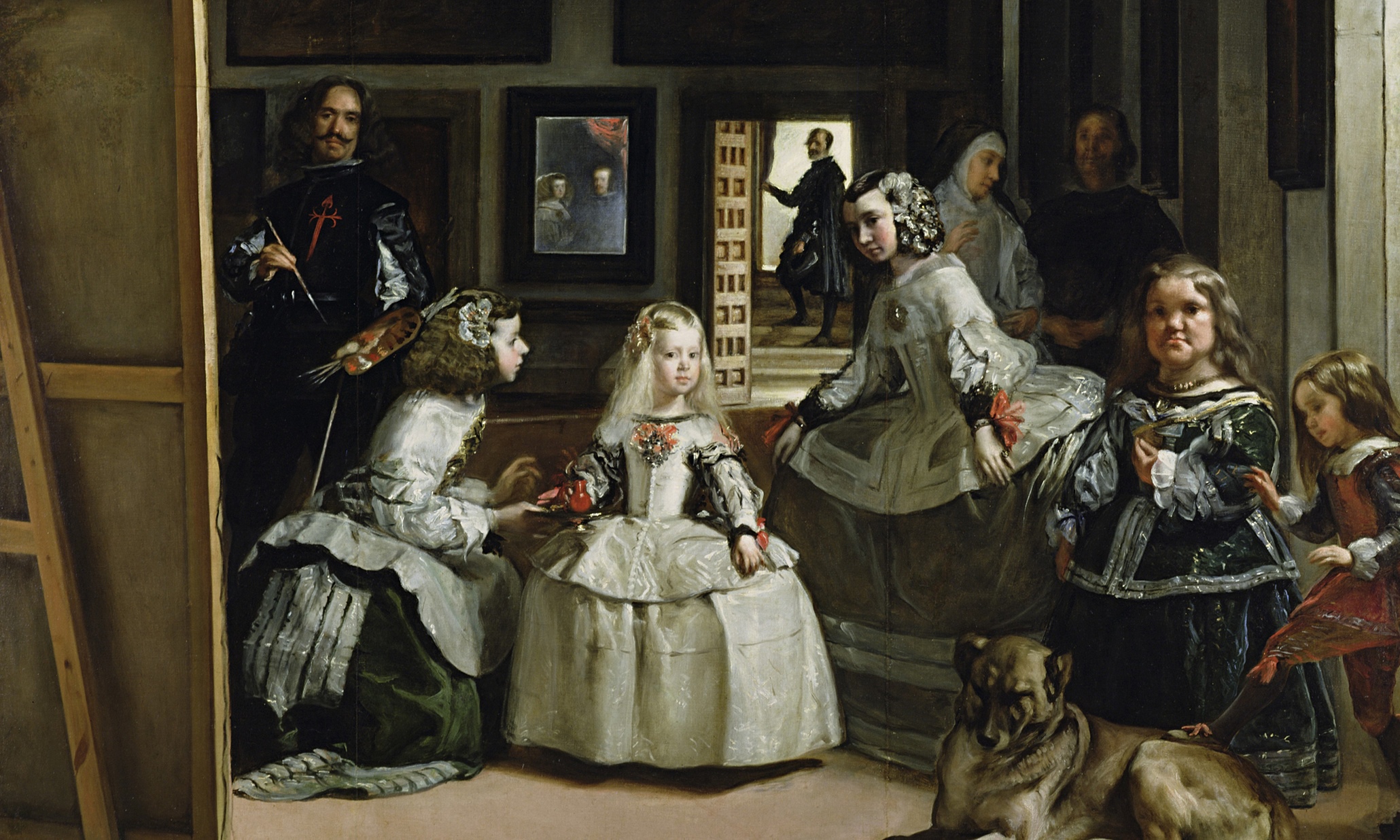 As I turned to look, all the people standing at the other end of the gallery suddenly moved aside as one, clearing an open view to the source of that light: Velázquez’s monumental Las Meninas. I had no thought of it, no idea it would be there or how vast it would be—an image the size of life, and fully as profound. The living people revealed the painted people behind them like actors in the same performance, and flashing up before me was the mirror-bright vision of a little princess, her young maidservants and the artist himself, all gathered in a pool of sunlight at the bottom of a great volume of shadow, an impending darkness that instantly sets the tenor of the scene. The moment you set eyes on them, you know that these beautiful children will die, that they are already dead and gone, and yet they live in the here and now of this moment, brief and bright as fireflies beneath the sepulchral gloom. And what keeps them here, what keeps them alive, or so the artist implies, is not just the painting but you.

You are here, you have appeared: that is the split-second revelation in their eyes, all these people looking back at you from their side of the room. The princess in her shimmering dress, the maids in their ribbons and bows, the tiny page and the tall, dark painter, the nun whose murmur is just fading away and the chamberlain silhouetted in the glowing doorway at the back: everyone registers your presence. They were here like guests at a surprise party waiting for your arrival and now you have entered the room—their room, not the real one around you—or so it mysteriously seems. The whole scene twinkles with expectation. That is the first sensation on the threshold of that gallery in the Prado where Las Meninas hangs: that you have walked into their world and become suddenly as present to them as they are to you.

The image holds you there, stopped in surprise, motionless as the moment it represents in which all these people pause too, except the little page nudging the stoic dog. Everything is still except for the circumambient air and the light fluttering across the white-blond hair of the princess, who stares at you with the candid curiosity of a child at the center of a painting that is itself so completely attentive. The dwarf gives you her frank consideration, hand on heart, the maids kneel or curtsy, the servants observe you, all the way to the man in black hovering on the threshold of this room, waiting to usher you into the next. And from behind the back of the great canvas on which he is working, the size of this one, steps the painter himself, taciturn, watchful, the magician momentarily revealed.

But take a few steps towards this painting in all its astounding veracity and the vision swithers. The princess’s lustrous hair begins to look like a mirage, or a heatwave scintillating above a summer road that vanishes at your approach. The face of the lady dwarf dissolves into illegible brushstrokes. The figures in the background become inchoate at point-blank range and you can no longer see where a hand stops and the tray it is holding begins. The nearer you get to the painting, the more these semblances of reality start to disappear, to the point where it is impossible to fathom how the image could have been made in the first place. Everything is on the verge of dissolution and yet so vividly present that the sunshine in the painting seems to float free and drift out into the gallery. It is the most spellbinding vision in art.

In commenting further to Laura about her discussion of the painting, Susannah Lipscomb, quotes GM Trevelyan.

“The poetry of history lies in the quasi-miraculous fact that once, on this earth, once, on this familiar spot of ground, walked other men and women, as actual as we are today, thinking their own thoughts, swayed by their own passions, but now all gone, one generation vanishing into another, gone as utterly as we ourselves shall shortly be gone, like ghosts at cockcrow.”

*The author's mother was kidnapped as a child and found five days later in another village.  She never remembered anything about the incident.  But her daughter, in researching it years later, begins to discover a host of family secrets and still-puzzling events. I haven't read it.  It just has an intriguing feel to it. Great title.

Update: When the figures in a painting are looking back out at us there can be an ambiguity whether they are meant to be looking at us or looking at the painter.  In this case there is no doubt, as the artist is in the painting, also looking at us.  If one looks in the mirror at the back one sees King Philip IV and Queen Mariana, who must be standing at the spot where we are. Velazquez liked making the important people less important and the unimportant people central, so it is more accurate to say that we are standing in the place of the king and queen. Also, the room we see in the painting is the room where it was hung, so when visitors came to view this life-sized painting they would have the somewhat odd experience of being in this very room - but all the figures are no longer there. In fact, most of them died within a decade, two at the most.