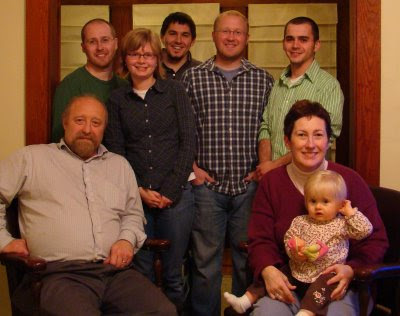 Chris is sworn in to the USMC, awaiting Jan 5 to leave for Parris Island. He has considered the military from time to time, but only when his friends started pushing him to enlist with them did he really get on track. It was gratifying to see him studying all the math and vocabulary he had slighted in high school, now trying to do well on his ASVAB entrance exam - and more than a little surprising to see him heading out to run five miles to get in shape. This is not a son I am familiar with. The final irony is that his knuckleheaded friends, who can’t stay out of bar fights, did not get accepted. The current year’s schedule looks like South Carolina, California, Okinawa. This all adds up for Chris – his brothers all have a role as the Responsible One, the Brilliant One, the Handsome One – he didn’t have a definition in his own mind. Now he’s The Warrior. He’s going to be a HumVee driver, adding to our worries.

Can you look online and find me an open grocery store?

Ben got his first hurricane in Houston, Ike. The excitement of danger rapidly turned to the boredom of inconvenience, as he discovered his food stocks of bacon and microwave pizza were useless with the power out. He didn’t have batteries. He did have one candle. It turns out he was one of the lucky ones, only in the dark for two days, with no damage to car or apartment.

This marks his first Christmas away, but he came up over Thanksgiving, and we are meeting him in San Antonio for New Year’s.

In heaven, where all the restaurants serve Clams Casino and French Onion Soup, and smoking is permitted at the table…

After struggling with ill health for several years, Tracy’s mom died in February. The quote is from the eulogy by Mickey, Tracy’s younger brother. Though Ann was ready to die, both Tracy and especially her Dad miss her very much. Stuart is going through the house bit by bit. Every time Tracy visits he has a pile of “interesting” items for her to take home.


The next person who says “You’re only as young as you feel” gets it right in the mouth.

In the enclosed photo, taken at one of the few times this year that everyone was available, the man seated on the left looks suspiciously like my Grampa Wyman. Something just jumped out at me. I searched the features in an effort to identify the resemblance. Is it the tilt of the shoulders? The cheekbones? If I imagined his glasses on me and shaved off the beard… Well, he was bald. And he was old. There’s a heckuva start right there. Fortunately I liked him; I never noticed what a fine-looking man he was before.

That’s what I’m reduced to at this point, squinting at pictures of myself wondering who that guy is. But life is good. Good friends. Good books. Warm house. Internet access. Still posting as Assistant Village Idiot. I like my own company. The boys all have lives and are just about launched; Tracy looks younger than me, which works out pretty well, because I can still see just fine. I do worry that this is about the age that Bilbo got sent on an adventure. Would I answer that knock on the door? I think so. I think so.

All three uncles vie for Emily’s attention, but John-Adrian is the most shameless. “Say ‘Uncle JA.’ You like me best, right?” He also tries to get Jonathan & Heidi’s irritable cat to like him, and the less friendly of our dachshunds (which Chris renamed “Paranoid Babushka.”) People like John-Adrian. Animals, not so much. He’ll have better luck with Emily.

He goes to school online, and will graduate with an accounting degree this summer. He works full-time for his girlfriend’s father, and they greatly enjoy each other’s company. His girlfriend Samantha gets most of the rest of his time. We keep looking at his mail from jewelers and raising an eyebrow at him questioningly, but he’s very private, that one.
Posted by Assistant Village Idiot at 10:10 PM

Hello, what a nice family you have...All my best and prayers to your son Chris who joined the USMC. Chuckchuck